The principal aim of the project is to analyse the scope of undetected arthropod preys Colombian woolly monkeys consume through time using the non-invasive technique of DNA barcoding. We aim to detect preferences in the sort of arthropods woolly monkeys consume. Also, to evaluate a relationship between resources availability and consumption, and detect differences of arthropods consumed by adults and juveniles. By integrating molecular data on the diet of woolly monkeys, it will help to understand behaviourally and ecologically the influence of food availability on this primate species. This can be a very important component for reintroduction and conservation programs as they have a high arthropod consumption (up to 44 %) and this should be taken into account when returning individuals to wild habitats. 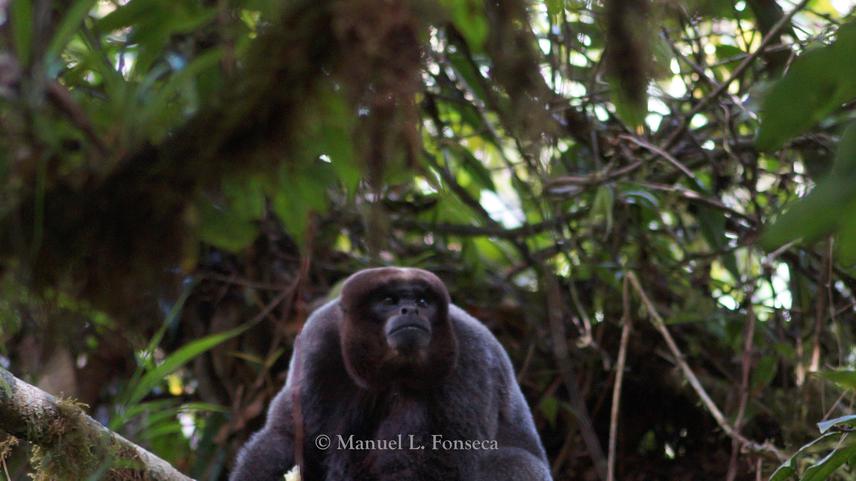 Male is vigilant while resting.

The study of feeding behaviour in a critically endangered species is of vital importance, to understand their trophic interactions and dietary strategies. Colombian woolly monkeys are one of the largest New World primate species, they are endemic of the Andean and nearby regions of Colombia. The diet is composed mainly of ripe fruits and is complemented with other resources as young leaves and arthropods. In mountains, Neotropical forests are characterized by the abundance of epiphytic plants, which harbour a large variety of arthropods. Not surprisingly, woolly monkeys living in sub-Andean forests are known to consume and forage for arthropods at high rates (ca. 44 % of the dietary composition). However, little is known about prey identity they are consuming, and thus the nutrients available from them. This project aims to explore the diversity of arthropods consumed by woolly monkeys and the seasonal changes over time using molecular techniques.

Indeed, we will use the DNA barcoding method, which makes reference to a molecular technique that allows sequencing small fragments of COI genes from unknown specimens within a sample, these mitochondrial DNA sequences can be used as genetic bar codes that are encrusted inside cell. For this reason, genetic bar codes are very useful in diet studies, as this technique allows broadening the spectre of consumed preys.

Currently, reintroduction programs of woolly monkeys are planned for mountain environments, but some Andean forests are dominated by plant species that do not offer fleshy fruits for monkeys, such as Oak forests. Perhaps, the success of such programs could be predicted based on the importance of other type of resources, such as arthropods. However, we first need to know what kind of arthropods woolly monkeys eat, in order to determine their occurrence in Andean forests and the carrying capacity of the environment. Therefore, we expect that this project will be an ecological approach that also will help in primate conservation.