Many endemic and elusive herpetofauna (amphibian and reptile) species, totalling 41 amphibians and 187 reptiles (Kusrini et al. 2021), have been discovered on Java. However, because the survey's primary focus was on West and Central Java, there was a sampling gap in East Java, which also happens to be the province with the highest deforestation rates (Kurniawan et al. 2021). Herpetofauna are therefore regarded indicator species, and their existence or absence is frequently indicative of ecological health. Furthermore, global climate change poses a threat to herpetofauna populations through zoonotic disease (Kusrini et al. 2008, Doherty et al. 2020), emphasizing the importance of conservation for Indonesia's rapidly diminishing herpetofauna. 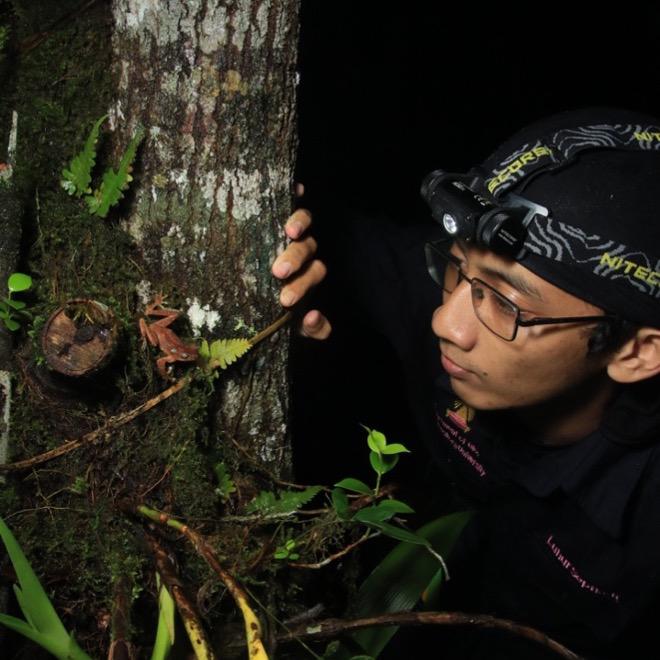 The survey in East Java were mostly focused on the southwestern side of Bromo Tengger Semeru National Park (TNBTS), primarily in the buffer zone during recent years resulting in numerous herpetofauna species from various families (Septiadi et al., 2018; Erfanda et al., 2019; Arroyyan et al., 2020). However, TNBTS is also threatened by habitat loss, agricultural expansion, increased tourist activity, volcanic eruption, and forest fires (Sawitri and Takandjandji 2012). It was clear that TNBTS, offers a diverse range of habitat types and is considered a high-diversity area, which could be a home to endemic, cryptic, and threatened herpetofauna species, but sampling efforts and our knowledge on species diversity and population threats are limited.

Our ongoing collaboration with local institutions and TNBTS staff has resulted in the discovery of several endemic and enigmatic species, such the Bluebelly Java Snake and the Pearly tree frog, that will be possible candidates for future targeted conservation projects. To fill the biodiversity baseline data gap, we will explore the richness, distribution, and ecology of herpetofauna in TNBTS, as well as the significant threat to their population, through this investigation. We also intend to comprehensively catalog TNBTS's herpetofauna and educate stakeholders, NGOs, and residents about the importance of herpetofauna conservation.

Our project will lead in conservation recommendations, including: (i) identifying ecologically significant herpetofauna species that will contribute to the establishment of baseline data; (ii) documenting the possible risk and major threat to herpetofauna; (iii) determining an important conservation site; and (iv) to make recommendations to TNBTS staff, NGOs, local stakeholders, and residents who live near the important conservation site.