Registering the Presence of Andean Bear (Tremarctos ornatus) in an Andean Forest on the Western Slopes of the Central Cordillera, Totoró-Cauca, Colombia

Contribution to the Management of the Andean Bear-Human Interactions in the Influence Area of Puracé National Natural Park, Southwestern Colombia

The three focused species are Andean bear, Colombian weasel and mountain tapir are listed in threatened categories for the IUCN red list. We are looking to support the Puracé National Park in research, environmental education, conservation actions and ecological restoration. This protected area is an important refugee for the three species.

First, the Andean bear (Tremarctos ornatus) is listed like a vulnerable species, where the threats are habitat loss, illegal killing and climate change. A landscape assessment of habitat suitability and connectivity carried out for this assessment identified ~30% of habitat as unsuitable to sustain viable Andean Bear populations. As a consequence of habitat loss, human-bear conflicts are likely to increase resulting in reduced tolerance and escalating bear kills. 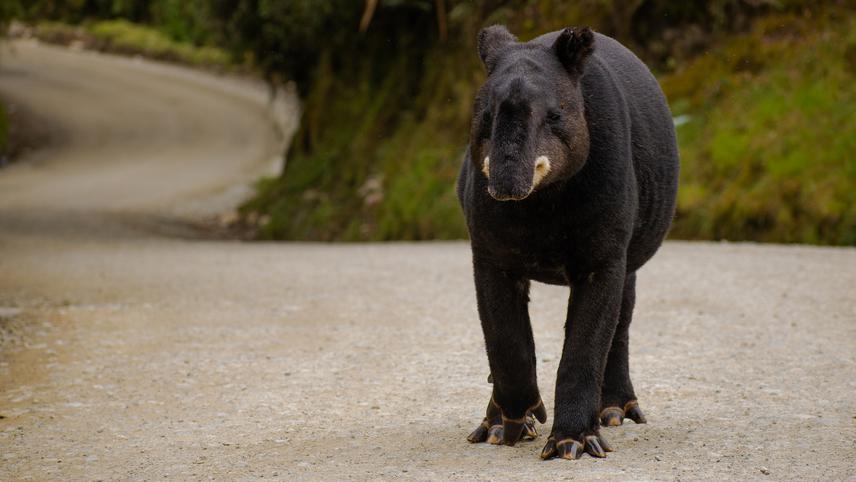 The Mountain tapir, Tapirus pinchaque, is the endangered and the smallest extant species of the genus Tapirus and has restricted distribution to cloud forest remnants and paramo habitats in Colombia, Ecuador and north-eastern Peru. The population declines are estimated to be greater than 50% in the past 3 generations. Furthermore, the causes of population decline have not ceased and are inferred to be greater than 50% decline in the next 3 generations.

The Colombian weasel, Neogale felipei, is considered the rarest carnivore in South America, due to its low representation in biological collections, and its restricted geographic distribution. To date, it is known from only eight localities in the Central and Occidental Andean cordilleras, in an elevational range between 1525 and 3013 m. Among its main threats is the deforestation of the Andean ecosystems it inhabits. Due to the scarce knowledge about the Colombian weasel, it has been suggested that sampling efforts should be intensified to know its current conservation status and possible threats, as well as clarify basic aspects of its ecology and distribution.

We will make research, environmental education and conservation agreements in Puracé National Park and surrounding area. First, we'll assess the influence of the two roads present in the protected area on the mammals. Second, we'll support the diffusion of conservation messages through local radios, local environmental festivals, flyers for the drivers, and citizen science focused on camera traps. Third, we implement two new pilot experience of sustainable productive management in farms affected by Andean Bear. Four, we support one local plant nursery to reproduce native plants for habitat restoration. This project is a collaborative work with Puracé National Park staff and local communities.