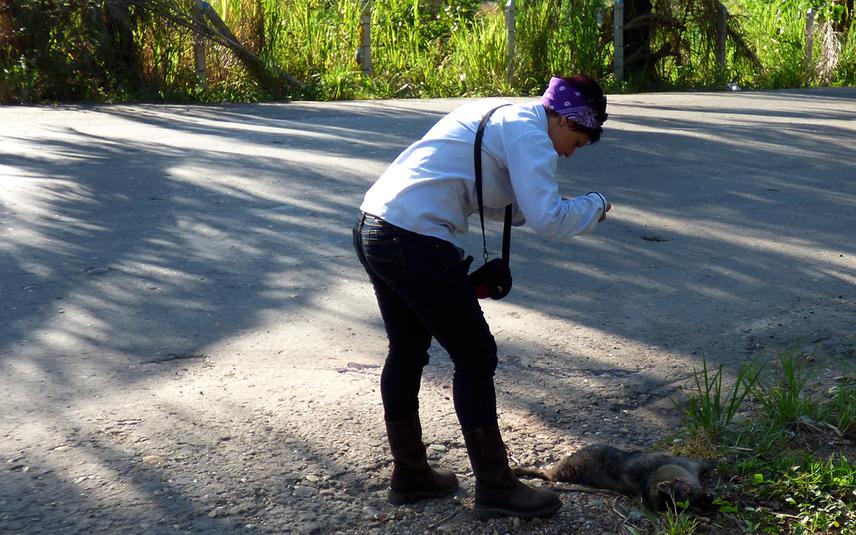 Roadkill sampling in the study area. Photo by F.L. Meza-Joya.

Wildlife-vehicle collisions kill millions of wild animals around the world, however this number could be underestimated because the absent of systematic monitoring of roadkill events. In Colombia, studies assessing wildlife mortality on roads are scarce and only few has intended to identify the factors promoting this phenomenon. As consequence, we are still far to implement effective corrective actions aimed to mitigate the road-wildlife conflict. Wild mammal mortality on roads is a problematic with profoundly deleterious effects, including reductions in population sizes, increases local extinction, and loss of ecosystemic functionality. In this sense, this study aims to conduct a critical assessment of mammal wildlife-vehicle collisions in the Mid-Magdalena Valley, a region with a variety of ecosystems that support a high species diversity and constitute an important heritage and natural capital, but unfortunately are one of the most endangered ecosystems in Colombia.

The information gathered in this project will be useful to identify

(4) areas the functional connectivity from the landscape (i.e., areas used by the species as dispersal corridors).

We hope our results represent the baseline to propose a mitigation plan aimed to minimize the negative impacts related to road-wildlife conflict to the environmental authorities, as well to challenge regulators and decision makers to generate legal normativity aimed to include this problematic in actual and future road projects. We expect that species from other taxa inhabiting the study region and identified as sensible to roadkill (e.g., snakes, some lizards, anurans, and birds) also will be benefited with our project. Thus, this study has important implications for the conservation of several mammal and non-mammal species, which although are not the target of our project may also be sensible to vehicular collisions.