Conservation of Birds and Vegetation in a Global Deforestation Hotspot: The Chaco Forest of Argentina

Chaco forest is one of the most threatened ecosystems worldwide with extremely high deforestation rates. Córdoba province has recently passed a law that requires landowners to reforest if their land has less than 2% of forest cover. The implementation of this law provides a unique opportunity to combine research and environmental education. We aim to: analyze the scale of effect, and identify forest cover thresholds below which bird diversity significantly declines; by working with rural schools, develop an environmental education program which involves increasing social awareness and producing native seedling of native woody species to be available for reforestation efforts. 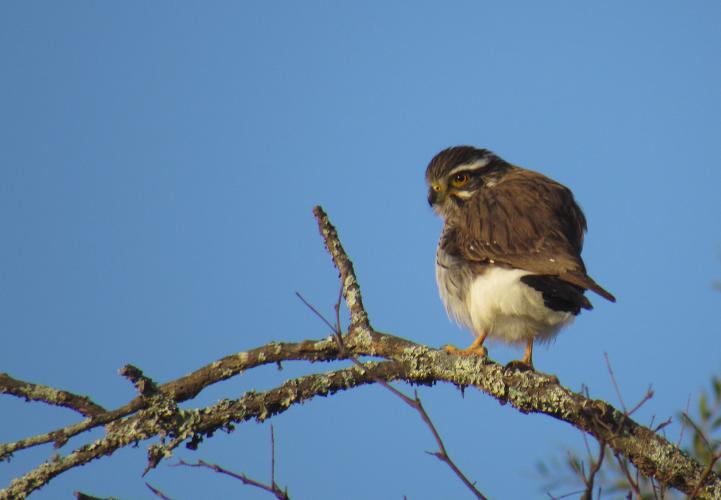 Spiziapteryx circumcinctus, Spot-winged Falconet. Most of its distribution occur within the Chaco region, being considered as a nearly endemic species.

South America Chaco forest is one of the most endangered regions worldwide, mainly due to agriculture expansion. In the extreme south of this phytogeographic region (Córdoba, Argentina), habitat loss has been dramatic during the last 30 years. Recently, Córdoba province has passed a law (Provincial Agroforest Law 10467) to conserve minimum forest cover in agro-ecosystems. It requires that landowners maintain at least 2% of forest cover, or otherwise that they reforest their land with woody species. This new law raises the question if 2% of forest cover is enough to conserve biodiversity.

Furthermore, we anticipate there will be a demand of seedling by many farmers to reforest their lands. On the other hand, we see the need to raise awareness of this situation among members of the local community. In this scenario, we see a unique opportunity to combine scientific research and environmental education to contribute to the recovery of an endangered habitat. In the scientific literature there is a strong background of analysis of effects of forest loss on biodiversity. However, it is not known yet the ‘scale of effect’, i.e. the specific extension of landscape at which forest loss effects on biodiversity are highest. For example, to our knowledge, there are no studies conducted in the region that estimate the amount of forest necessary to conserve the avian community within a specific landscape extension. On the other hand, the region lacks from local nurseries which could produce the seedlings required for reforestation activities. Collaboration with local schools will allow us to work on the construction of a nursery and production of those seedlings, also taking advantage of the interaction to carry out environmental education tasks.