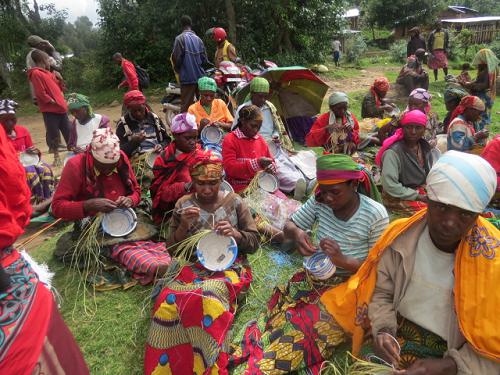 Basket weaving by women in Shingiro.

The project proposes actions to address challenges identified during the project 1st funding and upgrading acquired knowledge and skills to drive a theory of change axed on engaging adjacent communities in the mitigation of human pressure on the park by helping 66 women from Historically Marginalised People understand and play their awaited role in the park-people management processes through modern weaving based income generating activities and capacity building of Inkingi to become officially registered women based cooperative leading its members and serving as a community role model towards improved living conditions independent from the park resources.

Studies, reports and conservation tools, consider Historically Marginalised People’s living conditions as a serious threat to the conservation of the Volcanoes National Park, home to the mountain gorillas, in reference to their traditional ways of living. This community is traditionally a forest dwellers and fruit gatherers which has therefore made them the greater dependent on park resources by harvesting wild food and hunting for survival or selling.

Evicted from the forest without any compensation during the creation of the national parks, they lost their traditional way of living. This has left them the poorest communities to the level that over 52% of their households depend on park natural resources compared to 18% in other communities.

The project targets 66 women from Historically Marginalised People from Shingiro sector of Musanze district in the Northern Province of Rwanda grouped in a community based called Inkingi. The project is designed to refrain identified challenges from hampering short, medium and long term conservation and socio-economic project outcomes through upgrading Inkingi from a community based organisation to a legally registered cooperative by organising refreshing training of acquired knowledge and skills as well as accommodation of new ones to keep the project momentum of responding the market with innovative products.