In Benin, aquatic ecosystems constitute an important reservoir of biological diversity and valuable assets for livelihoods and food provision. Indeed, artisanal inland fishing is of great socio-economic importance to local communities and employs thousands of professional fishermen. However, fish catches are decreasing, and some fish species are rarely or even no longer found mainly in inland waters due to anthropogenic activities (Lalèyè and Moreau, 2004). Benin waters harbour many fish species that need attention since they are already classified as threatened in global IUCN red list and national red list. Therefore, the need to undertake conservation actions becomes a major concern. The present project has been designed to document the knowledge levels of stakeholders (fishermen, fishmongers, local authorities, and fisheries managers) and current threats to these fish species, to raise awareness among stakeholders including youth and schoolchildren, about the necessity to protect threatened species and their habitats, to define together local management measures for these species and to accompany the development of fish farming as an additional income-generating activity in the communities. 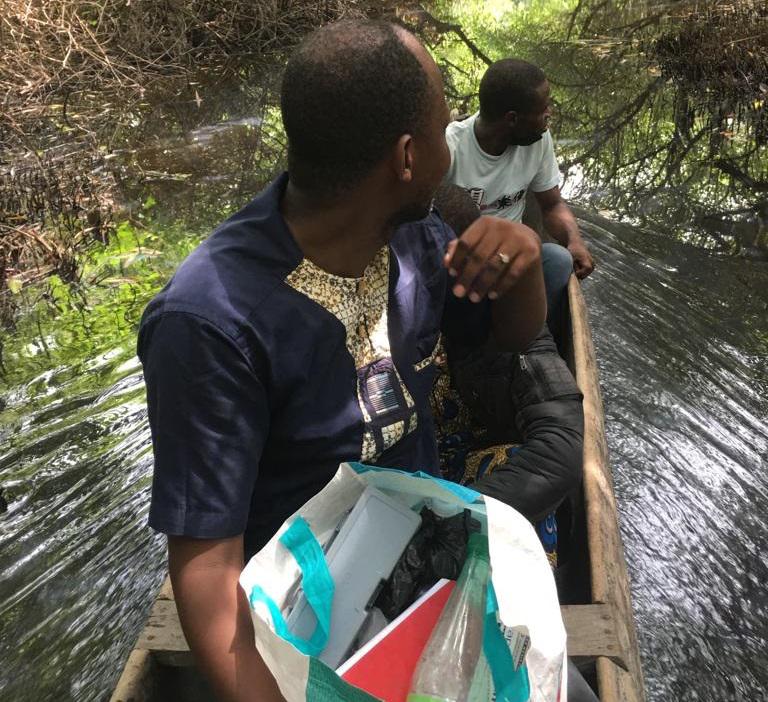 Dr. Pelebe Edéya Orobiyi Rodrigue and his colleague Koussovi Guillaume in a canoe on Benin coastal lagoon looking for fishermen in operation.

We will work within fishing communities (from South to North) exploiting the main ecosystems namely Ouémé River (Agonlin-Lowé), Lake Nokoué (Sô-Ava), Porto-Novo Lagoon (Aguégués) and Niger River (Malanville). The fieldwork will also include Ganvié Tokpa and Djassin-Topka in southern Benin, and fish market of Malanville in northern Benin.

In South-Benin, training on techniques to sustainably improve the current practice of traditional pen farming of tarpon Megalops atlanticus (a vulnerable species) in Lake Nokoué will be considered. In North-Benin, above-ground tank farming of African catfish Clarias gariepinus, feasible in household yards and not directly in the Niger River, will be introduced.

The updated list of species-specific threats is critical for the development of efficient conservation strategy and for the further update the conservation status of fishes in Benin Red list. The conservation measures for threatened fish species from this project will be summarized in a policy brief that will further be used to influence policymakers. Advocacy will be done towards authorities to include notions on threatened species in teaching at the schools we educated children. At the end the project, functional local committee will be installed to serve as monitoring and surveillance organization of level of compliance with adopted protection measures of critically endangered, endangered and vulnerable fish species within fishing communities. Toolkits developed from this project will serve other conservation institutions in Benin fisheries sector.