This project will be conducted in and around three different protected areas situated in three different geographical areas (with different climatic conditions) on the island of Sri Lanka focusing on medium-sized carnivores. Camera trap studies will be integrated with food and genetic analysis methods to generate important data regarding the occurrence, distribution, habitat use, population, and ecological roles of medium-sized carnivores which include cats, civets, mongooses, otter, and jackal. Furthermore, the development of proper direct and indirect identification methods of these species will be given priority in this project to build community awareness and help the conservation. 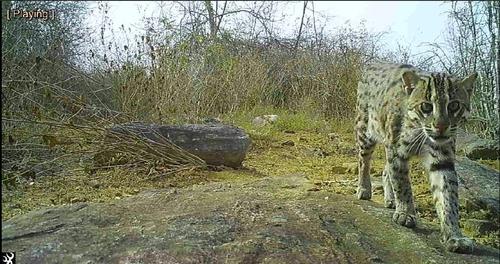 Terrestrial medium-sized carnivores of tropical forests represent an ecologically diverse and influential guild of forest vertebrates playing key roles as predators as well as prey. Given their smaller size and ability to thrive in diverse habitats, they are usually more abundant than large carnivores, yet their impact within communities is generally assumed to be relatively minor. Therefore, this particular group of animals does not get research attention as much as their larger counterparts (eg: big cats). In the tropical forests of Sri Lanka, this particular group of animals is represented by small cats, civets, mongooses, otter, and jackal.

This project focuses on areas within and surrounding three protected areas in Sri Lanka (Sinharaja Forest Reserve, Maduru Oya National Park, Horton Plains National Park) which are more or less situated in rural areas of the island posing different levels of human threats. Information regarding the distribution, occurrence, and habitat use of medium-sized mammals in these particular areas will be useful in future conservation, management, and awareness programs. This project will be integrated with the work that is currently being conducted in Sinharaja Forest Reserve, Horton Plains National Park, and Maduru Oya National Park using camera traps. Camera trap studies that are currently conducted within the protected areas will be expanded into the areas surrounding them including the human habituated areas (including agricultural areas). Species occurrence maps will be generated showing hotspots of high occurrence. An effort will be put in to generate population density estimates.

Species identification methods will be developed, especially to prevent misidentification. Food analysis, genetic analysis, and other indirect methods will be integrated into this methodology. The findings of the work will be disseminated to the science community via conferences, symposiums, and journal articles. This data will be supplied to organizations such as DWC, IUCN, and CITES to help their work and fill the gaps in data availability.

Community awareness programs will be conducted in the site-specific areas and the general public will be made aware of using social media, newspaper articles, and mobile applications (in the form of guides). Awareness and information posters will be developed to display in DWC offices in the selected protected areas (to raise visitor awareness).