Tachypleus gigas -Indian Horseshoe crab (HSC) is distributed along the eastern coast of Odisha But the population is drastically declining and in alarming state. Although it is illegal to capture Horseshoe crab in India, the accidental capture of these animals remains a major threat to HSCs populations in the region. The local fishermen of Odisha State in India are not fully aware of the economic and ecological importance of the horseshoe crab. Currently, information on the capture rate of Indian Horseshoe crab along Balasore coast is limited. According to recent news papers the crabs are being netted during night as they prefer. Moreover, they are also being trafficked furring night on four-wheelers from Odisha coast. This project aims to quantify the Horseshoe crab capture, trade statues and educate fishermen to reduce these captures. The depleting population and losing important biodiversity has prompted us to undertake such a novel project. 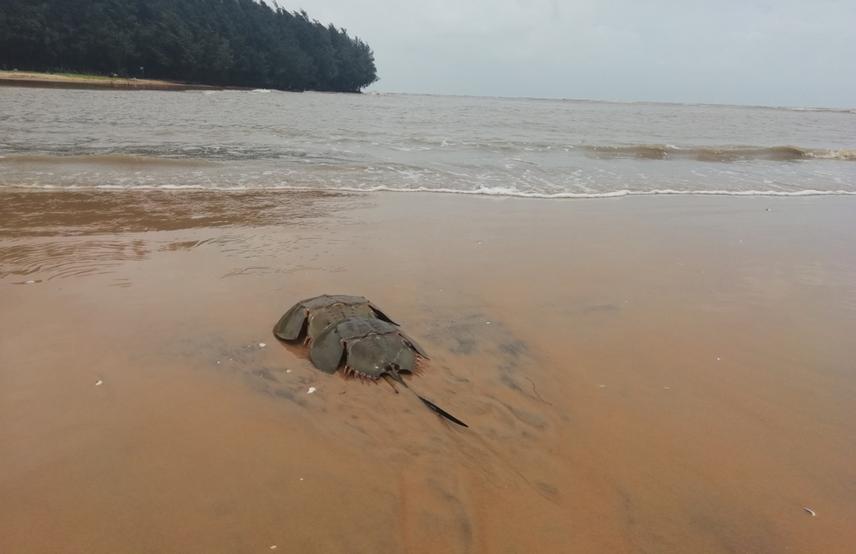 Horseshoe crabs are economically and environmentally important species, the most significant fact of this sea animal being the conserved morphological and other characteristics right from the dinosaur era. Unfortunately many of these animals get trapped in the fishing net of the local fishermen who then throw them away in distressing condition. The continuous encroachment of the beaches and increased human activities along the beaches leads to loss of breeding ground and loss of spawning area for these animals. More over sometimes the solitary HSCs Owing to this reason, awareness for providing a safe habitat and conservation of this living fossil needs to be created among the school children and the local population of the Chandipur sea beach and the adjoining nearby areas, where these are seen in substantial numbers. The children will be taught about immediate need of conserving this sea animal through small workshops, thematic art competitions highlighting various aspects of its life and conservation and rallies. The awareness among the local population residing along the sea coast where the HSCs habit and use for spawning will be spread by organizing village community meets, including audio-video presentations, explaining the historical perspective of the HSCs, their invaluable worth in making biomedical products as well as about the alarming rate of their population reduction due to human activities and loss of breeding grounds and threat to the HSC eggs from other land animals near the breeding ground. This concerted effort has a great potential for providing the horseshoe crabs with a safe place to breed and propagate their numbers. Our activities will lead to making beaches safe and clean for all animals, which is a good step towards enriching the beaches for growth and propagation of sea animals.

The Bay of Bengal is linked to China, Bangladesh, Malaysia, Thailand and potentially serve as an entry point for wildlife smugglers. According to recent news papers the crab being trafficked furring night on Boat from Odisha coast however detailed information about HSC smuggling routes and the people involved aren't studied precisely. Our team interact with fishermen to identify the circumstances surrounding the capture of Horseshoe crab in fishing operations; whether or not HSCs are captured intentionally and what the fate of Horseshoe crab captured are (released or killed for food and income). Data and information on poaching and wildlife trade need to be analysed to guide effective actions to curb illegal HSC trade.