The extensive land cover changes, water contamination and deforestation are the biggest threat to the Rufous-Throated Dipper. This species is a threatened and endemic bird of the Southern Yungas, whose population size is estimated below 4000 individuals. At global scale, it is classified as VULNERABLE by the IUCN. We will gain in get knowledge on how changes in land-cover and river uses at different altitudinal levels of the Austral Yungas affect the genetic structure of the Rufous-Throated Dipper. These changes could generate barriers avoiding dispersal of individuals between meta populations, and thus, interfering on the genetic structure of the Rufous-Throated Dipper. 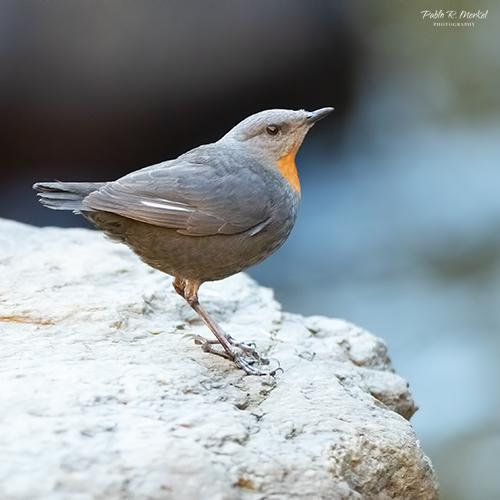 The Rufous-Throated Dipper is endemic of the Austral Yungas. According to the IUCN, its categorization is VULNERABLE, whereas at a national scale it is THREATENED, with a declining in its population numbers (less than 2000 individuals). It is a resident species, although it makes small altitudinal movements along the year: during the winter goes from higher to lower elevations, always following the same body of water. It only occurs along Mountain Rivers and streams, between 1000 and 2500 m asl, with oxygenated and clean waters, and steep, shallow and rocky basins. For all this, it is considered a specialist species.

Landscape genetics is the study of the explicit quantification of the effects of landscape configuration and composition on the gene flow and spatial variation of genetic diversity of species. Genetic data along with information taken from high-resolution satellite images have allowed to achieve important insights addressing different issues that include the identification of barriers affecting species dispersal, the quantification of diversity, the drawing of inferences related to the effects of changes in the landscape on the population structure, the identification of migrant species in relation to landscape features, and the comparison of genetic patterns of species between contemporary and historical landscapes.

The activities will be focused on three main points:

1- Metrics related to the structure and features of water bodies;

3- The Rufous-Throated Dipper individuals will be caught with mist nets, and ringed for later identification. We will take a small amount of blood from each individual, through a puncture in the brachial vein. The sexing will be done through blood samples via PCR amplification of the P2 and P8 markers for the ZW sexual chromosomes.

Hence, in order to assess how anthropogenic activities and changes in land use prevent, hamper or facilitate the gene flow between Rufous-Throated Dipper populations, is important to establish management guidelines and conservation plans for the species, but also for its environment. Through informative talks and provisioning of teaching material in schools and local communities, we would like to reach out to a wide range of citizens and persuade them about the importance of the conservation of biodiversity and its environment, with population genetics, especially in the Austral Yungas of Salta and Jujuy provinces. In addition, we will try by all reasonable means to persuade decision makers to be able to develop effective monitoring programs in the long term.