The aim of the project is to promote the urgently needed protection of a critically important forest area by producing a training film to increase capacity to monitor bonobos (Pan paniscus) and other endangered species. The other aim is to prepare the making of a bespoke conservation film which will be widely disseminated. 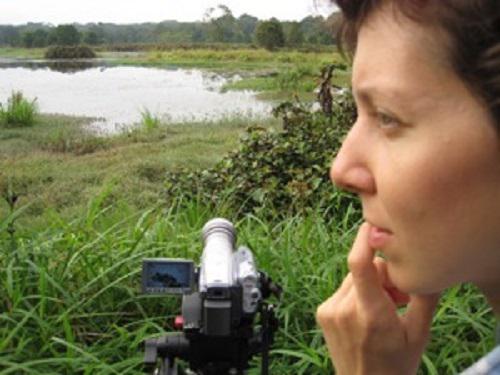 Spent 7 hours filming this bai, and was bitten by hundreds of insects, but it was worth it. © Dino S’Hwas

The bonobo (Pan paniscus) is currently listed as endangered by the IUCN and is found only to the south and west of the Congo River. At the eastern boundary of their range two researchers, Terese and John Hart are working tirelessly to halt the exploitation of this relatively unknown forest, named TL2 after the 3 rivers surrounding the area; Tshuapa, Lomami and Lualaba Rivers.

Terese and John have been working in the Democratic Republic of Congo (DRC) for more then three decades. In early 2007, their aim was to explore the forest seemingly untouched on the satellite images. Early findings indicated that a major portion of the forest supported no bonobo populations at all, they have been hunted out.

With this in mind, their goal altered and became an urgent issue to protect the existing bonobo populations and to decrease further exploitation of their habitat. The TL2 forest is not only home to a very rare species of great ape, but also holds unique populations of other endemic and endangered species such as the okapi (Okapia johnstoni), Congo peacock (Afropavo congensis) forest elephant (Loxodonta cyclotis) and even a new species of primate. The existence of these rare and endemic species confirms beyond doubt that the area is rich in biodiversity, in urgent need of protection and, ultimately, in need of achieving National Park status. Communication is one of the most important needs to promote any conservation project, especially the ones without long-term financial support, as in the case of TL2.

I intend to make a training film for long-term use to increase the capacity in the region to monitor populations of the endangered species, and to produce another film to raise awareness of the threats facing the survival of bonobos by inspiring and empowering local communities to take an interest preserving their natural habitats. The films will be distributed widely via Internet, national television channels in DRC, and possibly at international conferences to raise public awareness about the existence of the conservation project and its goals, and they will be also screened locally to remote villages and provincial meetings to attempt to educate, inspire and encourage action amongst the local communities.