This project aims to protect the Critically Endangered Toad-skinned frog Indirana phrynoderma by securing its habitat with the support of local stakeholders. Multiple approaches in the form of habitat restoration, high-efficiency stoves in local households and an annual amphibian monitoring program in collaboration with Forest Departments will be adopted to address the major threats that the species faces within its habitat. 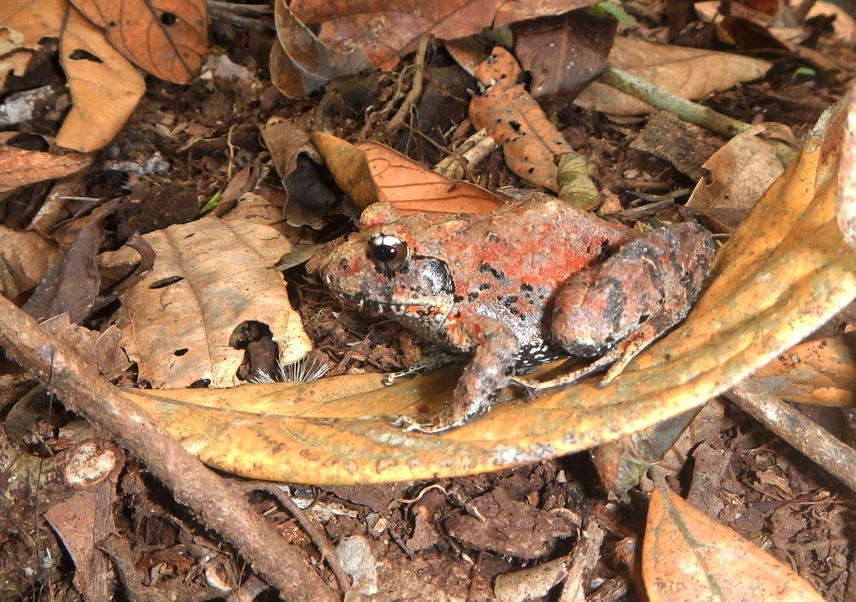 The Toad skinned frog Indirana phrynoderma is confined to specific habitats (1300-1700m asl in rainforests) within a restricted distribution range of 100km2 in the southern Western Ghats of India. The major threats recognised for this species is habitat loss due to infrastructure development and firewood collection and, habitat degradation due to pesticide runoff and the occurrence of tea and coffee plantations. The species was recently found to occur outside the protected area network at a plantation town. The threats directly affect the species and this project aims to secure the population of the Toad skinned frog by securing its habitat.

Towards this, two degraded locations outside the protected area network where the species has been identified will be improved. Native, wet-evergreen tree and shrub saplings will be planted at these locations with the aim to reduce gaps in the canopy cover. The project will also aim to reduce the dependence on fuelwood by local communities that live within the species range. By reducing this, the habitat of the Toad skinned frog will retain more fuelwood that would provide consistent and increased refugia for shelter and thermoregulation. The habitat disturbance caused by firewood collection will also be reduced. This would be accomplished by installing high-efficiency stoves at local households that would reduce firewood utilization by 40-50%. The stoves would also improve human health by effectively removing smoke generated from cooking that causes respiratory ailments. Finally, the project aims to initiate an annual amphibian monitoring program with the local Forest Department that would assist in improved understanding and conservation attention towards amphibians.

The proposed project incorporates the local stakeholders in the species range and integrates their support in implementing them. This would improve the overall conservation attitude among the population in this region of high biodiversity that would assist especially in the conservation of this Critically Endangered, priority ZSL EDGE and Alliance for Zero Extinction (AZE) species.