Analyze biological, ecological and genetic aspects of the Atlantic rainforest´s largest aquatic predator, for predetermining sensitivity to human and climate changes; and promote the viability of the species and its habitat. 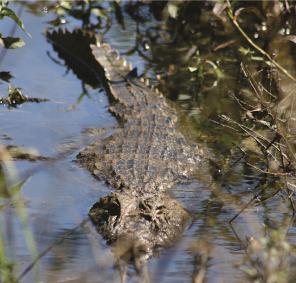 The broad-snouted caiman, Caiman latirostris, is widely distributed and relatively continuous in the northeast and east central Argentina occupying different environments, result of the high degree of plasticity in terms of habitat requirements (Prado et al., 2012). In this sense some aspects of the population dynamics of the species can vary according to the type of habitat in which a particular population lives.

The populations of upper Iguazú River (IR), in Misiones province, Argentina, has two attributes that make it particularly interesting for monitoring. Firstly, large predators of aquatic ecosystem usually control populations of predators at lower trophic levels (mesopredators), and play a key role in the maintenance of biodiversity and ecosystem processes (Estes et al., 2011). In the food webs of streams and rivers of the Atlantic rainforest, broad-snouted caimans are one of the main top predators. Even in the IR lack most of the big predatory fishes present in other tropical and subtropical South American eco-regions as a result of large waterfalls that acted as barriers. Second, there is some evidence that forest-dwelling broad-snouted caiman populations are more isolated and have less reproductive success than populations inhabiting more open habitats. This suggests that forest-dwelling populations could be at a higher risk of decline or extirpation than open-habitat populations. These differences between populations of different habitats require the estimation of population parameters separately, since the extrapolation of parameters between populations can lead to serious errors of estimation. However, no information is available on population size, temporal trends or genetic structure of broad-snouted caimans in the IR. Obtaining this information is crucial to understand what factors may affect populations of broad-snouted caimans and produce population fluctuations in one of the world's biodiversity hotspots.

The Parque Nacional Iguazú (PNI) protects one of the largest remnants of the Atlantic Rainforest. While the park is an effective conservation tool for many terrestrial animal and plant species, its effectiveness in protecting aquatic top predators has not yet been assessed. So focusing on the population of broad-snouted caiman that lives in the PNI, the project will:

2) assess the genetic viability of this populations,

3) and create interdisciplinary working group that develop an appropriate conservation plan for this species, recommending areas and strategies for long-term viability of this species and its habitat.