Molecular genetics has a wide range of practical implications for sea turtle conservation. It is commonly used to define conservation units and broad-scale connectivity between nesting and foraging habitats. Sumatra hosts internationally significant nesting and foraging populations of hawksbill and green turtles; however, there is no available genetic data on either species from this area. This project aims to identify haplotypes and genetic structures in five sea turtle rookeries in Sumatra. The obtained data will provide an essential baseline for further studies in the Asia-Pacific region and will be used for conservation management. 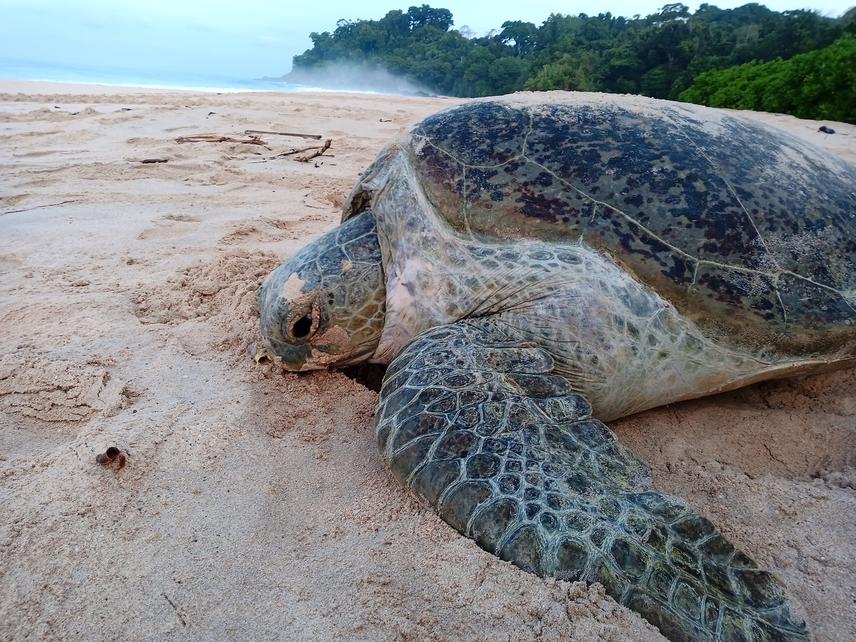 A green turtle returning back to the sea after laying eggs on Bangkaru beach in the early morning. © Adela Hemelikova

The project’s main goal is to identify haplotypes and genetic stock structure in Sumatra's hawksbill turtle and green turtle rookeries and support further conservation through a newly established network. The methods described below will help to achieve these objectives:

2. To quantify overall genetic diversity at rookeries in Sumatra

3. To evaluate the stock structure and connectivity of hawksbill and green turtle rookeries in Indonesia and the Indo-Pacific

4. To establish baseline data for future genetic studies of feeding grounds throughout Indonesia and the Indo-Pacific

For tissue sampling and data analysis, we will use standardized methods recommended by the Asia-Pacific Marine Turtle Genetic Working group. All data will be submitted in GenBank and thus become publicly available upon publication, enabling the collected data to be used in future studies.

For the second part of the project, which focuses on awareness-raising and creating a network for sea turtle management and conservation in Sumatra, we will use methods and conduct steps that we have identified as most needed during the first Rufford project.