The Impact of Sand Mining and Irrigation Canals on the Spawning Migration of Labeobarbus spp. of Lake Tana and Possible Mitigation Measures

Enhancing Conservation of the Labeobarbus Species Flock of Lake Tana, Ethiopia, through Better Understanding of their Ecology and Active Participation of the Community

Conserving the Labeobarbus Spp Flock of Lake Tana through Better Understanding of their Migratory Behavior and Participation of the Community: The Case of Gilgel Abay River

The aim of this project to investigate the extent of threat of sand mining and irrigation canals in Dirma, Megech and Arno Garno Rivers, tributaries of Lake Tana, on the breeding behaviour of Labeobarbus spp. and suggest possible mitigation measures. 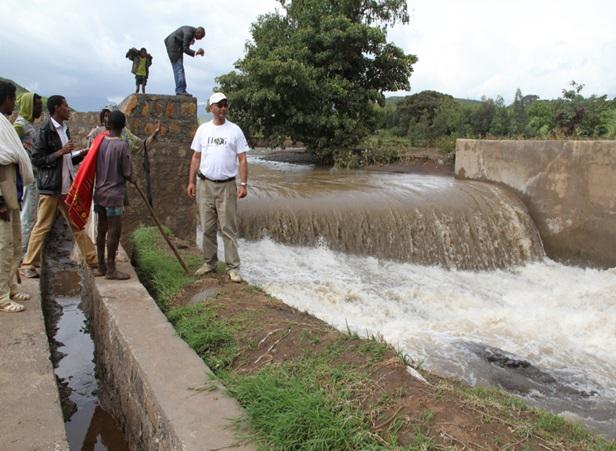 The principal investigator and a graduate student, Gizachew Teshome, at a newly constructed small dam and diversion canal on Shini River.

The Labeobarbus spp. are the only remaining cyprinid species flock in the world and are ecologically and economically important fishes in Lake Tana, Ethiopia. However, they are faced with various threats, largely anthropogenic.

Sand mining and irrigation canals are potential problems for the survival of Labeobarbus spp. of Lake Tana. Sand is being excavated from main feeder rivers of Lake Tana and their smaller tributaries to be used in the construction industry. Some of these sand mining sites are important breeding grounds for the migratory Labeobarbus spp. It has been noted that those Government Offices that are giving the permits are not even aware of the potential negative impacts of sand mining.

Small and large scale irrigation canals are spreading around Lake Tana. Most notable are the small irrigation canals found on Megech and Dirma Rivers. These canals take in water from the rivers and irrigate the surrounding plains. These canals apparently create problems in the migratory routes of juveniles of Labeobarbus spp. that are returning from tributary rivers to Lake Tana, as some juveniles were seen trapped in these canals. However, the extent of the impact has not been studied and documented and discussions were not conducted with regard to impacts of sand mining and canal diversions with the relevant stakeholders.

Therefore, this project will conduct field studies to find out the extent of sand mining and its impact on the fish fauna of three rivers found on the northeastern part of Lake Tana (Dirma, Megech and Arno-Garno) and will also look at the effect of irrigation canals in these same rivers on the migration of the juveniles of Labeobarbus spp. that are migrating back to the lake. All concerned officials, development workers and farmers that provide permit and also use irrigation canals as well as sand

mining will be consulted for awareness of the problem and discussion of potential mitigation measures.