Earlier, with the participation of our team, a natural science justiﬁcation for creating an additional cluster of the Ustyurt Reserve on the border of Kazakhstan with Uzbekistan and Turkmenistan on an area of about 600 thousand hectares was developed. Biodiversity in this area has not yet been suﬃciently studied, and during the proposed project we plan to continue work with camera traps both in proposed new area and in in the existing territory of the reserve. All terrestrial and avian predators will be monitored by using camera traps at the feeding sites with periodic laying out of slaughterhouse by-products.

In addition, our team previously participated in projects to assess the negative impact of power lines on populations of birds of prey and boundary wire fencing on transboundary populations of ungulates, and we plan to continue these activities. 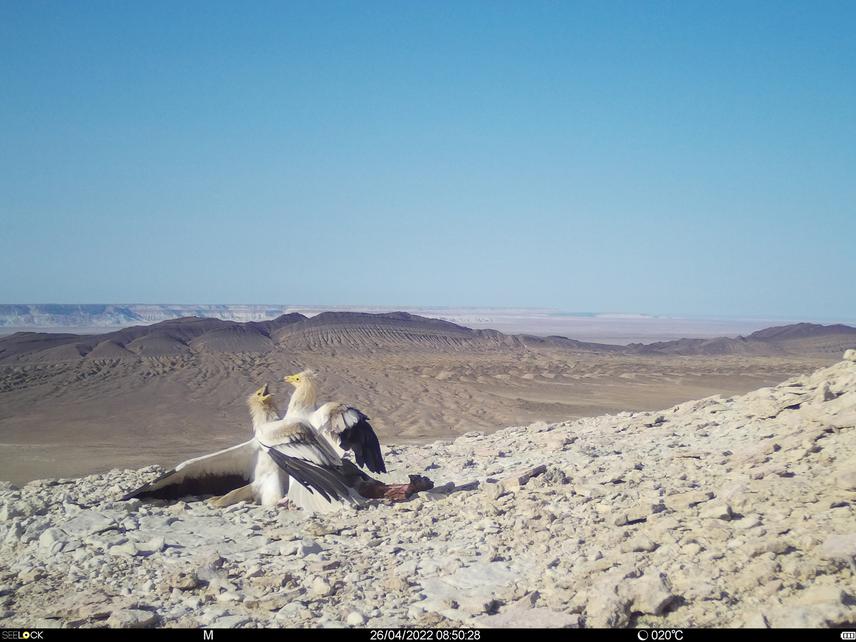 Egyptian vultures Neophron percnopterus fighting over prey. These birds are the most common species of scavenger birds on the territory of Ustyurt Reserve.

Main aims of the project include:

1. Up-to-date information will be obtained on the current state of populations of terrestrial and avian predators in the Ustyurt State Reserve and in proposed the South Ustyurt cluster, which is planned to be established in 2022-2023. This data will be an additional argument for expanding the territory of the Ustyurt Nature Reserve.

2. Developing positive community attitudes toward terrestrial and avian predators: publications in the media, posting of information on the Ustyurt Reserve's website and in social networks.

3. The impact of overhead power lines on raptor populations will be assessed in the Karakiya Province of Mangistau region and recommendations to mitigate this negative impact will be prepared.

4. Work will continue on assessing the impact of boundary fencing on transboundary populations of ungulates and lobbying for redesign of these facilities to enable transboundary migration of gazelles under the CMS.

5. A summary on the fauna of terrestrial and avian predators of the Ustyurt State Reserve will be prepared for publication, as well as the articles on the problem of bird electrocution and impact of boundary fencing on ungulates.