Who Are the Living Dead? The Cost of Non-Lethal Injuries to Wildlife in Murchison Falls National Park, Uganda

This project aims to minimize human-wildlife conflict in and around Murchison Falls Conservation Area by improving peoples’ livelihoods. Several measures including the Snares to Wares Initiative have reduced the number of lions injured and killed inside Murchison Falls National Park. However, many animals that escape or are rescued from wire snares are maimed. The impacts of snaring on the population are unknown and yet injured individuals are taken as part of the population. I will use non-invasive technology to assess the impact of snare-injuries on the individual animals of key wildlife species.

(i) Identify and document the nature of injuries to wildlife from getting caught in wire snares.
(ii) Quantify the energy cost and impact on fitness of snare injuries to wildlife
(iii) Generate practical guidance to assess and respond to injured individuals based on the extent of the injury and the body condition. 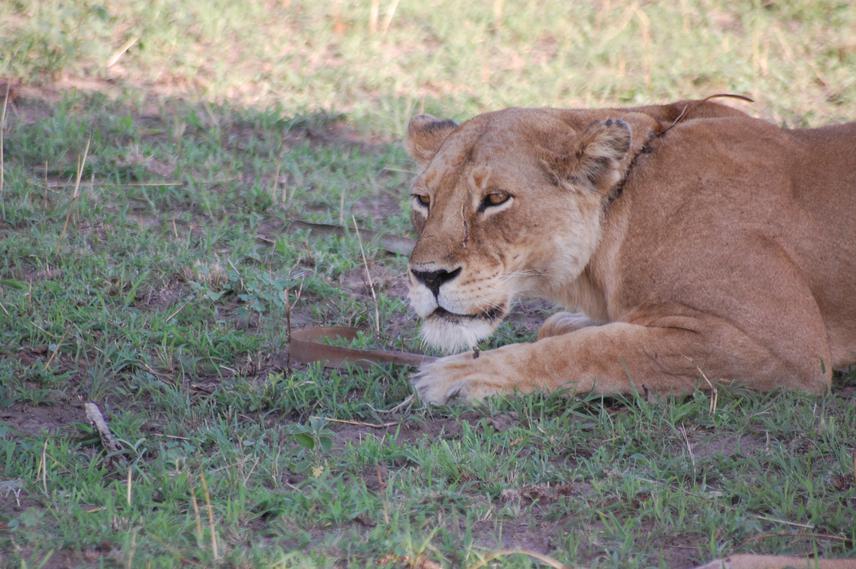 This project focuses its efforts at one key site for carnivore conservation in Uganda, the Murchison Falls National Park (MFNP) and Pakwach town on the northern periphery of the park. MFNP is the largest National Park in Uganda yet holds the smallest population of lions and hyaenas in Uganda. Lions are listed as Convention of International Trade in Endangered Species Appendix II and are regarded as ‘vulnerable’ by the International Union for the Conservation of Nature Red List.

I conducted an extensive snare survey between 2018 and 2019 and found that MFNP had the highest density of wire snares compared to any other place. This was part of an ongoing project to counteract wire snares via which I implemented a community-based conservation intervention called the Snares to Wares Initiative. This project has grown to more than 350 artisans. Preliminary field results from the snare zones show that more lions year lived to be older than a year than before, more females produced young, and on average there was longer pride-head turnover. Additionally, Uganda Wildlife Authority (UWA) has increased efforts to ‘rescue’ key species such as lions, elephants, and giraffes trapped in wire snares which has led to fewer individuals killed. However, rescued animals many times are physically disabled.

We do not know how these disabled animals are individually affected by these injuries and how this lost fitness impacts the population. Depending on how snare-injuries impact the animal, there could be implications on the estimated population of that species given that some individuals might be alive and included in the population estimate and yet be excluded from other vital functions such as successfully mating due to the injury. Additionally, understanding the fitness of injured individuals is important in making decisions on how to respond and if necessary, how to intervene. My research will now focus on understanding whether animals trapped and injured but not killed by snares remain viable members of the population and to identify the proportion that is ‘ecological zombies’. Given the limited resources available for wildlife management and the high numbers of snared animals inside MFNP and many other protected areas faced with snaring, the results of my study are critical in allocating these resources and conserving wildlife.