Pandi's mushroom tongue salamander (Bolitoglossa pandi) has been found in only two localities, in fragments of Andean forests besides streams around 1300 masl, in an area busting with agriculture and infrastructure development 60 miles from Colombia's largest city, Bogotá. It is currently endangered according to IUCN and its distribution range is not accurately documented. We intend to reassess its status and estimate its extinction rates with an intensive sampling and monitoring during a year, to estimate the dependence to habitat quality, mobility and susceptibility to fragmentation. This will be done using occupancy modelling methods 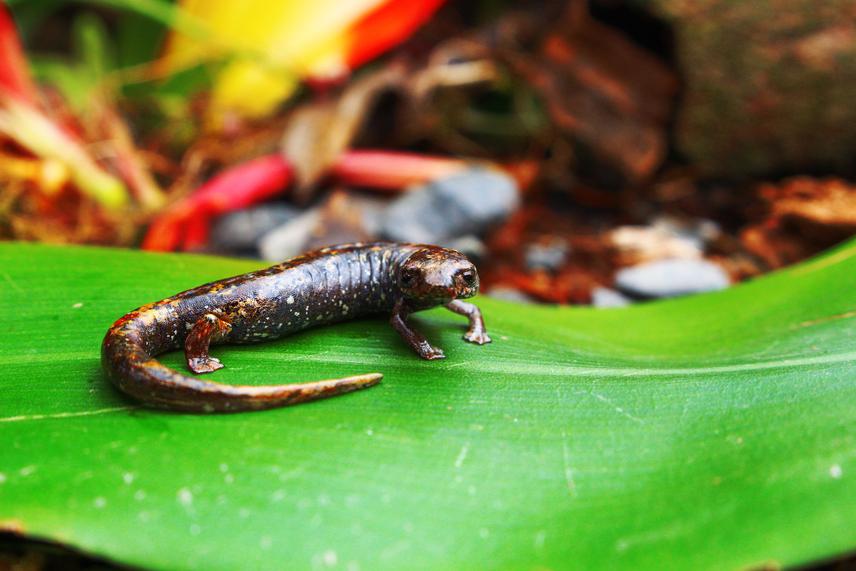 Colombia is home to more than 700 species of amphibians, and much of that diversity is due to the forests in the Andes. Distribution ranges of fauna in these habitats are small and endemism is common. Andean forests are the most threatened habitats in the nation due to drastic transformation of native vegetation by urban growth, agriculture and cattle.

This project will document and model the distribution range, evaluate the conservation status, estimate extinction risks, and identify threats to the salamander Bolitoglossa pandi. This salamander is an endangered species that is known only from two sites in an area of severely fragmented Andean forests. It is believed that it has strict habitat requirements and fidelity, just like other direct developing Andean amphibians, but it is not clearly understood how much fragmentation and habitat transformation affects the species. Its population size is not estimated and mobility not assessed. Conservation strategies with local communities in specific areas can be planned only after determining the salamander´s conservation status, evaluating the extinction risk, and identify threats to the species.

The project looks forward to include local communities in the monitoring and further design of the conservation strategies that are not in conflict with their activities following methods of Citizen Science. We will work closely with the local authorities which are very open to initiatives like this one as well as with the environmental authorities, which have the particular responsibility to design and implement conservation plans for the endangered species in its territory. Additionally, the results of this project will help us design models applicable to species of small vertebrates that live in fragmented and transformed habitats, with life histories that are very different from the life histories of large mammals and birds, which have been used to develop studies of occupation models and design of conservation programs in temperate areas.