Goliath frog (Conraua goliath) is rapidly decreasing across its range. This project aims at building capacity of a wide range of audience including youths and community leaders towards conservation of the goliath frog and the management of their ecosystems. Locals will be engaged through education programmes and awareness raising campaigns to conserve the Goliath frog. This project is going to promote community-based institutions and further the understanding of the Goliath frog/sympatric amphibians through research. An integrated ecological model using remote sensing will be built to identify sites for further intervention as to unveil unknown populations or direct potential translocation efforts. 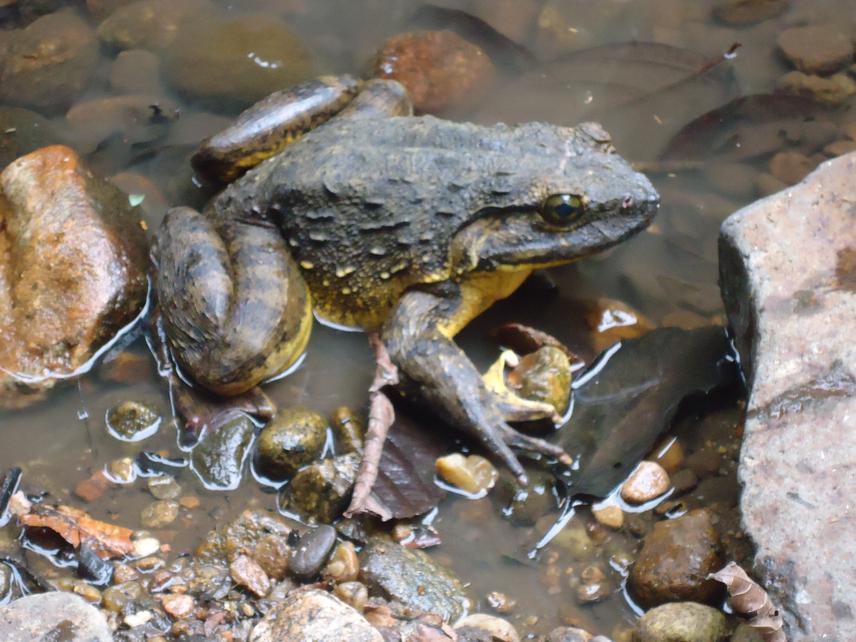 The Western and South-Western Cameroonian highlands are known to harbour high amphibian species diversity. Several distinctive anuran faunas converge in this region, partially explaining the high species richness. Among these, Goliath frog (Conraua goliath) continues to be aggressively hunted across its range, despite being protected. Recent report highlighting decline of amphibian in known Cameroon amphibian hotspots (Hirschfeld et al. 2016) further highlights the need to conserve amphibians. Considering the later, this project will initiate the restoration of the depleting amphibian populations, and protect their threatened ecosystems based on changing behaviours in local communities through raising awareness and planning for sustainable protection of this species.

Specifically, it is planned to

ii) Promote and build community-based institutions. To be more effective, a local group of amphibian lovers will be promoted (modelled on Save the Frogs in other countries). This entity will serve as first line in barring the way to unsustainable harvesting and other problems facing this species.

iii) Develop conservation education packages for the children in the area. This will be articulated around a student poster contest to be organized and prizes to be awarded, leading the students to become more interested in amphibian conservation issues. Children likely to become hunters later in their life would thus be provided with another perspective that is favourable to conservation.

iv) Further the understanding of the Goliath Frog by developing an integrated ecological model using remote sensing. This scheme will cover a large spatial extent at high resolution and will help identifying sites (habitat) with high potential to be further used for conservation at a finer scale.