The invasive Australian redclaw crayfish Cherax quadricarinatus established naturalised populations in Lake Kariba, where it is rapidly spreading and affecting fish caught on gillnets through partial consumption as reported by fishermen. Amongst the proposed methods to control crayfish populations is intensive trapping. Our project aims to explore a method of localised crayfish population suppression to reduce associated socioeconomic impacts on livelihoods. 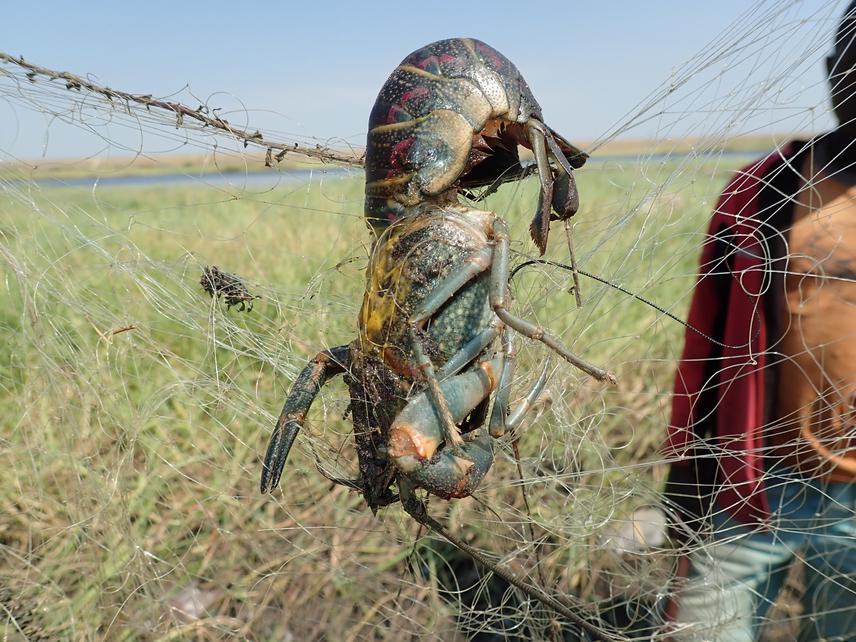 Redclaw crayfish entangled on a gillnet in Lake Kariba.

Interest in reducing invasive crayfish populations has grown recently as stakeholders and managers have recognised the massive negative impacts that invasive crayfish can inflict on recipient ecosystems. Fishermen often catch crayfish on their nets as they partially consume fish entangled on their gill nets. The spoiled fish are not marketable and owing to the significant contribution from fisheries to livelihoods as a source of protein, income, or supplementary income, as well as the wider associated value chains, the losses associated with crayfish damages pose potential for severe and escalating costs if mitigation efforts cannot be motivated for. Since prevention is rare, practical management can rely on reducing or maintaining crayfish populations at low abundances to mitigate the socioeconomic impacts of the invasion. Methods currently used to supress invasive crayfish populations include intensive trapping. However, in a huge system like Lake Kariba, this method seems impractical. This project proposes localised crayfish population suppression through baited traps to reduce localised impacts on catch and other biodiversity in designated fishing areas. The baited traps will be placed close to the gillnets in order to trap the crayfish and thereby minimise their effect on fish caught on gillnets. Fishermen often discard these crayfish which can be a source of protein that they can incorporate in their diets if they are educated in ways of preparing them. Crayfish can also be used as feed for domestic animals (pigs, poultry). The fishermen in retrieving their nets, they can also harvest crayfish which they can process for consumption (that is if they accept crayfish into their diet) or to feed their domestic animals. Lake Kariba is also faced with a number of stressors which include overexploitation, low catches of fish and climate change. The recent stress (crayfish invasion) could be controlled by overexploiting the invader, substituting fish as a protein source which will subsequently reduce the pressure on fish. In this project, we also target educating the community about the impacts these invasive species have on both biodiversity and their livelihoods, and how they can aid in managing aquatic systems.