This project assesses techniques of reintroducing orphan or captured orang-utans to the wild in Borneo. 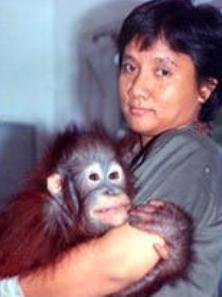 The Wanariset Orangutan Reintroduction Project was established in East Kalimantan, Borneo, in 1993 to help rehabilitate orphaned or injured orang-utans and then reintroduce them to the wild. In its first seven years the Project released 169 animals into two sites, representing some 1.7% of the minimum number of animals estimated to remain in Borneo. In many forest fragments, the existence of the orang-utans is the only justification for withholding logging concessions.

Success or otherwise of such programmes has historically been assessed in terms of the animals' survival for six months and subsequent reproduction. However such criteria are not suitable for slow-breeding animals such as orang-utans which might not be ready to breed for several years following their release. Success must therefore be evaluated in terms of the animals adaptation to their new environment, which could be measured by comparing behaviour before and after release. Rondang Siregar will be assessing a 'half-way house' concept where young animals spend some time prior to release in a habitat more similar to the wild environment, to measure whether this contributes significantly to their successful reintroduction.