The Kavango-Zambezi Transfrontier Conservation Area (KAZA TFCA) is one of the world’s largest trans-frontier initiatives, and spans five southern-African countries including Botswana, Zambia, Angola, Namibia and Zimbabwe. KAZA is home to one of the largest geographically intact lion populations, spanning from Hwange National Park in Zimbabwe throughout north-eastern Botswana to the Okavango Delta, and north into Namibia. This population forms the core lion population of the KAZA TFCA and is vital for genetic diversity within the region. However, improving connectivity within the region for lions to ensure population persistence and viability is challenging in the face of contrasting land uses, especially when these are separated by international boundaries. 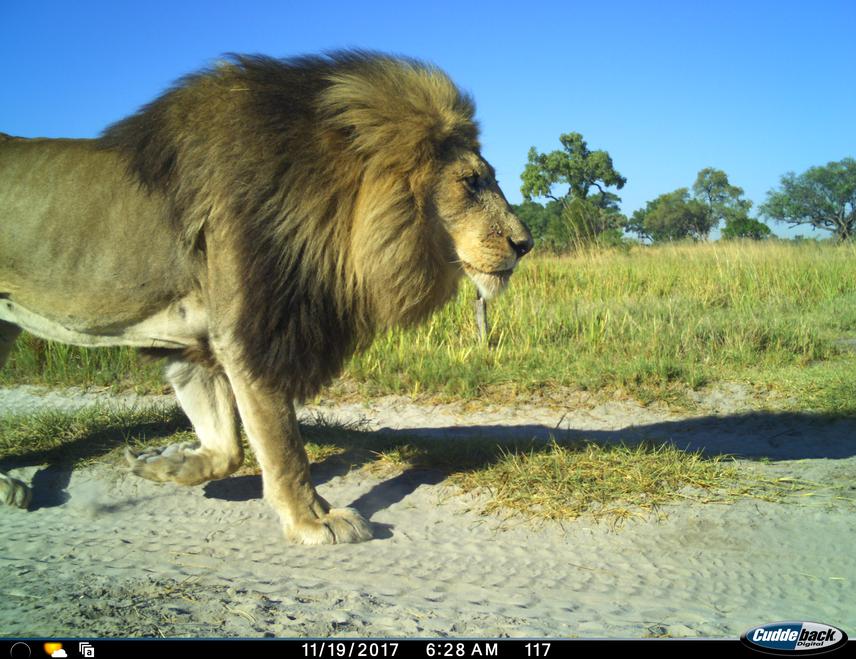 An adult male lion walks past a camera trap during a survey of the Okavango Delta. Camera surveys will be used to provide key population data on lion in the Chobe Riverfront and Linyanti systems of Botswana. © Trans-Kalahari Predator Programme, WildCRU.

This project, which aims to alleviate some of the challenges surrounding lion management in transboundary systems, covers the Linyanti system and adjacent Chobe River Floodplain. These areas are central to two key wildlife dispersal areas (WDA), the Kwando WDA and Chobe-Hwange Makgadikgadi WDA, and span the international boundary between Namibia and Botswana. While in Botswana, both areas rely on non-consumptive tourism, conservancies adjacent to these areas in Nambia, and communities adjacent to Chobe National Park in Botswana, rely on livestock and subsistence farming as their main source of wealth. Without buffer zones to ease the transition between wildlife and community areas, livestock losses due to lions are common, resulting in significant economic loss for rural farmers. This leads to retaliatory killing, which then also represents a potential loss in revenue for tourism operators who rely on lion sightings to attract tourists. From a conservation perspective, retaliation killings therefore have the potential to have significant impacts on the viability of these lion populations and connectivity within KAZA.

The main aim of this project is to work with local and transboundary stakeholders to establish baseline data on the lion populations in these areas, using large-scale camera trap surveys, and use this as a springboard to launch stakeholder-driven transboundary lion monitoring systems. These monitoring systems will contribute to the evaluation of success of mitigation projects employed on either side of the border to alleviate lion-human conflict and reduce retaliatory killings of lions. The project will also be used as an opportunity to build capacity in the Department of Wildlife and National Parks and other local stakeholders on camera trapping as a survey method and conservation tool.