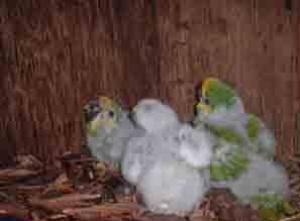 The Yellow-eared Parrot (Ognorhynchus icterotis) of the Northern Andes of Colombia and Ecuador remains one of the most critically endangered birds in the world, despite the exceptional successes to date of Project Ognorhynchus. The parrot’s catastrophic demise was halted in 1999 thanks to emergency conservation action by the project.

Today the population has grown rapidly to more than 500 individuals, yet the parrot still faces enormous pressures from hunting and unsustainable loss of its principal commensal habitat - the Quindío Wax Palm (Ceroxylon quindiuense). This project aims to secure the long-term future of the yellow-eared parrot, its unique wax palm habitat and the broad-range of other species that rely on it for their continued survival.