The Ecology and Conservation of Fishing Cats in Thailand

This project aims to compile data on fishing cat occurrence and work with local residents to undertake effectively communication conservation goals to a wide audience. 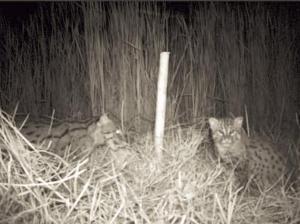 Wish bone and her kitten.

The Ecology and Conservation of Fishing Cats (Prionailurus Viverrinus) Project was initiated in Thailand in 2003. The project was initiated to respond to the perceived (but poorly documented) decline in fishing cat occurrence throughout the species’ South and Southeast Asia distribution. Few studies have documented the ecology of the fishing cat and its status in the wild remains unclear. However, there is mounting anecdotal evidence that the species may be in a precipitous state of decline throughout most of its historical range. 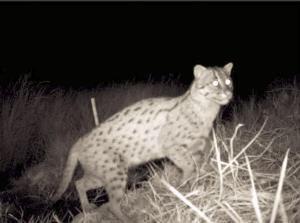 Adult female “Wishbone”. Her name comes from the Y‐shaped lines on her right shoulder which resemble a wish bone.

This project aims to build upon previous surveys with a number of rapid assessment surveys in areas identified as likely sites of fishing cat occurrence. These efforts will utilize sign survey methods to identify candidate occurrence areas which will then be camera-trapped. The animals will then be captured and fixed with radio collars in order to study their movements and habitat utilization. Based on a year of intensive telemetry, camera trapping, and observation of signs, a detailed scientific paper will be prepared reviewing the relevant literature and highlighting regionally distinctive characteristics of the species. Our team will use insights gained in this process to inform the rapid assessment surveys described above.

Site-based conservation action will be enhanced at Thale Noi Non-hunting Area in several ways. Most directly, local residents-some of whom have previously been involved in illegal wildlife hunting and trapping--will be actively engaged as research assistants for field work associated with the project. This approach has already proven effective as former local survey team members have clearly gained positive recognition for their efforts from their peers. Additional conservation efforts will include a simple but direct outreach program of presentations to local villages, the creation and distribution of posters celebrating the ecological significance and beauty of the fishing cat and other carnivores, and efforts to get “airtime” for fishing cat-related conservation messages in local and international news outlets.

We intend to use the activities at the Thale Noi site to bring significant attention to the current status of fishing cats and other wetland-dependent species in Thailand and hope to use this attention to attract additional conservation investment for wetland related projects. We further intend to take advantage of Thale Noi’s status as an international Ramsar site to seek additional conservation funding especially designed for these areas.