Saker Falcon recognized as “National honoured Bird” in Mongolia due to its strong connection with history of Mongolians. Unfortunately, in recent time, this nationally honoured bird becomes a victim of unfriendly (to birds) electricity distribution line in Mongolia, especially in eastern Mongolian steppe. There are several studies that investigated electrocution of birds. But, majority of these previous studies were limited to eastern parts of Mongolia. Thus, we were aimed to investigate conflict of this crucial threat and Saker Falcon in south parts of Mongolia. Our findings will contribute to make more accurately evaluated Saker Falcon’s mortality in Mongolia. In addition, we were also aimed to disclose genetic characteristics of Saker Falcon from our initial genetic investigation in Mongolia. Moreover, during our genetic investigation on Saker Falcon, we will try to develop and /or improve conservation genetics in Mongolia that plays in important role in species conservation. 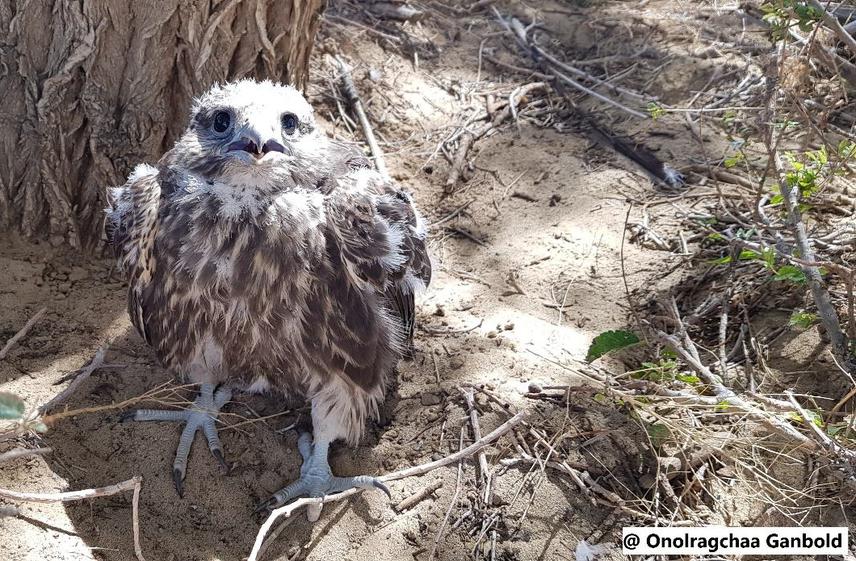 In Mongolia, researchers and institutes are contributing for Saker Falcon’s conservation as building artificial nests to support reproduction (some parts of Mongolia, but not enough), and trying to reduce risks at power lines (most of them with no effect), while no one mention regarding its genetic diversity in Mongolia. We will investigate genetic characteristics (phylogenetics, genetic diversity etc.) using mtDNA marker, namely D-loop region that more polymorphic, also very suitable for intraspecies variation. Our genetic resource will be consisted of blood and swap samples from nestlings in eastern and southern Mongolia, and tissue samples from electrocuted birds.

For collecting tissue as genetic samples additional to our blood samples, we will investigate electrocution of Saker Falcon at power distribution lines in southern Mongolia. In addition, such surveys are limited in southern parts of Mongolia. Therefore, we are trying to evaluate rate of electrocution in this area. We will check 15-kV electricity distribution lines in Dundgobi, Omnogobi, Ovorkhangai and Bayankhongor provinces during our study. Our electrocution findings together with previous ones could be basic requirements for government organizations and/or companies (constructing such lines) to construct friendly distribution lines for any bird species. Our team will try to suggest our own mitigation method as model of safe perching for raptors. Finally, we are expecting following results from our project:

• High level of genetic diversities with several past demography events

• Moderate to high rate of electrocution of Saker Falcon in open areas in southern Mongolia.