This project aims to further our knowledge about the geographic distribution, population density, socio-ecology, and genetic variability of the threatened ebony leaf monkey (Trachypithecus auratus) in Bali, in order to assess its current conservation status in Indonesia. 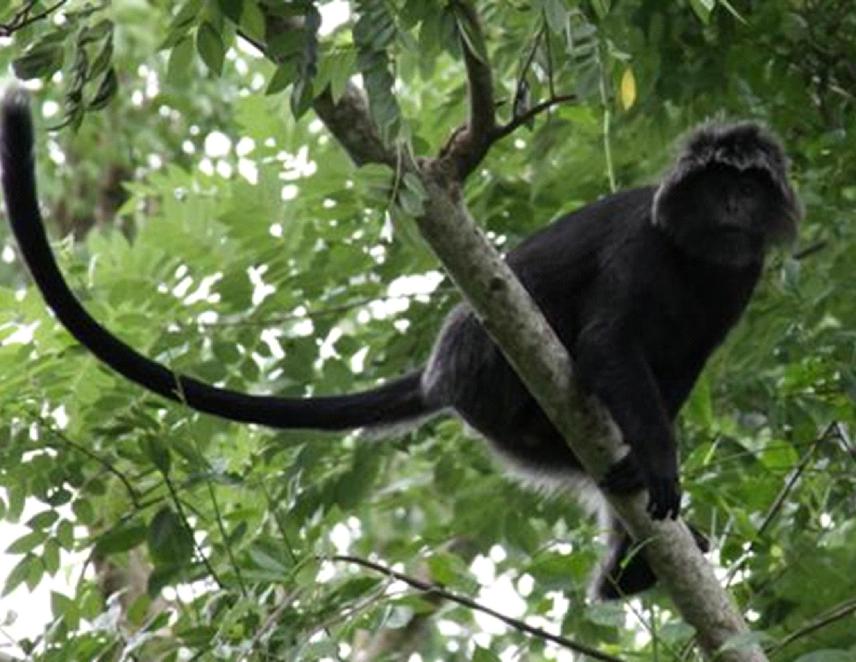 The ebony leaf monkey (Trachypithecus auratus), also called Javan langur, or “lutung” in Indonesian, is a threatened species from the Colobinae subfamily, endemic to the islands of Java, Bali, and Lombok, Indonesia. This species is considered “Vulnerable” due to a continued population decline. Its habitat has largely disappeared due to logging and land conversion for agriculture. This species is listed under CITES Appendix II, and has been protected by Indonesian law since 1999. However, little is known about its socio-ecology and conservation status in a broad range of natural forest areas. Most of the comprehensive studies have been conducted in a limited number of sites in Java. The West Bali National Park may have the last viable population of ebony leaf monkeys on the island.

The specific objectives of this study, conducted on Bali island, are:

1) to provide an updated and broader mapping of the ebony leaf monkey’s range within Bali,

2) to estimate the population density by measuring the number of individuals/groups per km²,

3) to assess the population structure of the species by documenting the frequency distribution of group sizes,

4) to evaluate the activity budget, home range size, and daily movement distance of a group living in a disturbed habitat, i.e. a small patch of plantation forest surrounded by agricultural fields,

5) to collect organic samples for the analysis of population genetic structure.

The study mainly covers the West Bali National Park (19,000 ha, including Prapat Agung peninsula and the southern part of the park), where a systematic census of ebony leaf monkeys is conducted by using repeated line transect sampling to measure the population density. This method entails travelling along a line recording all detected objects as well as the perpendicular distance from the line to each object detected (using GPS).

This project will provide new information on the geographical distribution, abundance, socio-ecology, and genetic variability of ebony leaf monkeys in Bali, which is necessary to assess the current status of this species, implement conservation priorities, and create management plans. More specifically, the use of mapped data is likely to aid researchers and park managers in decision-making that could lead to a better assessment of the species’ conservation status. Information on genetic variation within and between groups, particularly on a small island such as Bali, could be used to assess the viability of the studied populations.