Conservation of Cheer Pheasant through establishing survey plots for presence/ absence data and future monitoring of population trends, capacity building of the wildlife field staff in Cheer population monitoring and spreading conservation awareness among community around the survey plots. 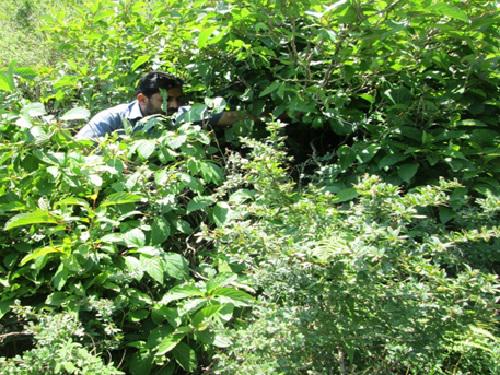 Research Assistant searching the nest during the survey.

Cheer Pheasant has been categorised as vulnerable, as pheasant's small population is naturally fragmented because it lives in small patches of successional grassland. Human population pressure, grazing pressure from livestock, hunting and changing patterns of land-use are resulting in its decline within this habitat (IUCN, 2012).

Current project is the continuation of our efforts to conserve threatened Cheer pheasant through establishing long term monitoring survey plots throughout Pakistani part of its range , capacity building of wildlife field staff in collecting presence/absence data on established survey plots while utilizing standardised monitoring protocol and spreading conservation education and awareness among community to ensure their involvement in the conservation of this threatened species in this part of Western Himalayan landscape.

Call counted surveys will be conducted utilizing previous and new survey plots which will provide latest information on the presence/absence and abundance of Cheer population in the project area. Besides presence/ absence data project will also gather information on impact of different anthropogenic activities on its population. For this purpose information will be collected through questionnaire for the assessment of hunting pressure, grazing and other human activities on Cheer Population and its habitat.

Project also aims to spread conservation awareness among community especially school children through workshops, seminars and distribution of printed awareness material which will help protect this threatened species in the project area. Based on all the information collated, recommendations will be made to the relevant authorities for the better conservation of this threatened species in Phalla game reserve, part of Western Himalayas.