A 1st RSG allowed the first steps towards vulture conservation in Guinea-Bissau. We assessed vulture distribution and abundance, the main threats and public perceptions towards these critically endangered species. Now we will focus on awareness raising and capacity building, engaging different stakeholders; 1) we will raise awareness among the general public, the student community (schools, universities) and, critically, the staff of veterinary services and slaughterhouses who may play a major role in vulture conservation, 2) we will train a network of people from key national institutions in the ecology, conservation and importance of vultures, and introduce simple monitoring techniques with the aim of laying foundations for future long-term monitoring of vulture populations in the country. 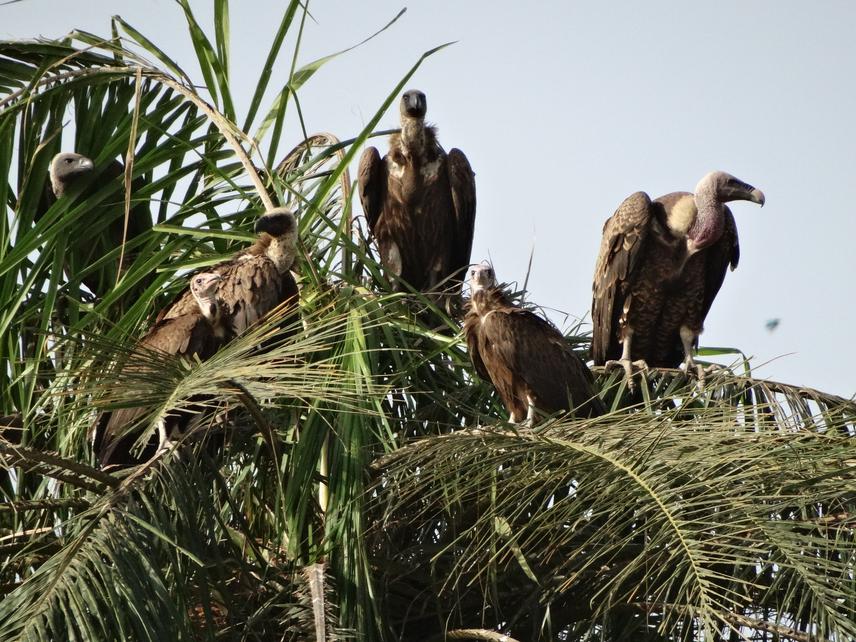 African vultures are among the most threatened groups of birds globally. In human settlements mutualistic relationships have been established: vultures cleaning in exchange for food. Thus, their decline may seriously impact human health. This crisis is however still poorly documented in West Africa, hampering the development of adequate conservation strategies. Guinea-Bissau is home to five vulture species, which mostly live in close association with human settlements and activities. Work supported by an RSG in 2016 estimated that the Hooded Vulture (Critically Endangered) population is ca. 40,000 strong, the world largest documented.

The Critically Endangered White-backed Vulture population was also found to be important. While there were concerning signs of the prevalence of serious threats for vultures in the country and of the negative perception some locals have about them, their importance was often acknowledged, mostly regarding cleaning services. Nevertheless, locals still fail to understand clearly the value of vultures and were thus unconscious to the consequences of persecuting them. There were still reports of past actions for poisoning vultures organized by veterinary services, and of persecution of vultures in slaughterhouses for belief-based uses. These concerning signs of behaviours of risk for vulture conservation have sadly materialize in 2020, in a major poisoning event driven by belief-based use that has recently whipped over 2,000 Hooded vultures in some of the most important areas for this species. In response to an urgent need to tackle this conservation issue, this project aims to:

(1) strengthen awareness raising towards vulture conservation near the general public and the young population, and develop awareness campaigns directed specifically to the veterinary services, slaughterhouses, livestock-herders and practitioners of traditional sorcery;

(2) promote capacity building actions and training sessions aimed at the national institutions dedicated to the conservation of biodiversity.

We will implement activities in the four most populated cities of the country in straight partnership with local NGO and national conservation organizations. The conservation of vultures in Guinea-Bissau is of great importance globally, and with this project we expect to promote a perception change amongst the Bissau-Guineans that negatively regard vultures, better inform key stakeholders on the importance of vulture conservation and consequences of vulture population declines, involve local communities and authorities to contribute to stop persecution and engage national conservation institutions to promote future monitoring and conservation actions benefiting vulture populations in the country.