Eulophia obtusa is a globally rare and possibly critically endangered ground orchid. The only known population was recently reported from northern Bangladesh (Sourav et al. 2007). The primary aim of this project is to save this species from extinction in Bangladesh, and possibly even globally, as to our best knowledge there is no known living plant anywhere in the world. Therefore, in order to save this orchid from global extinction, the project aims to implement a long-term conservation initiative with the following objectives:

1. Restoration and protection of the only known site of Eulophia obtusa in the world;

2. Surveys in suitable habitats in order to determine its current status in Bangladesh;

3. Understanding natural history of this least known orchid in the world; 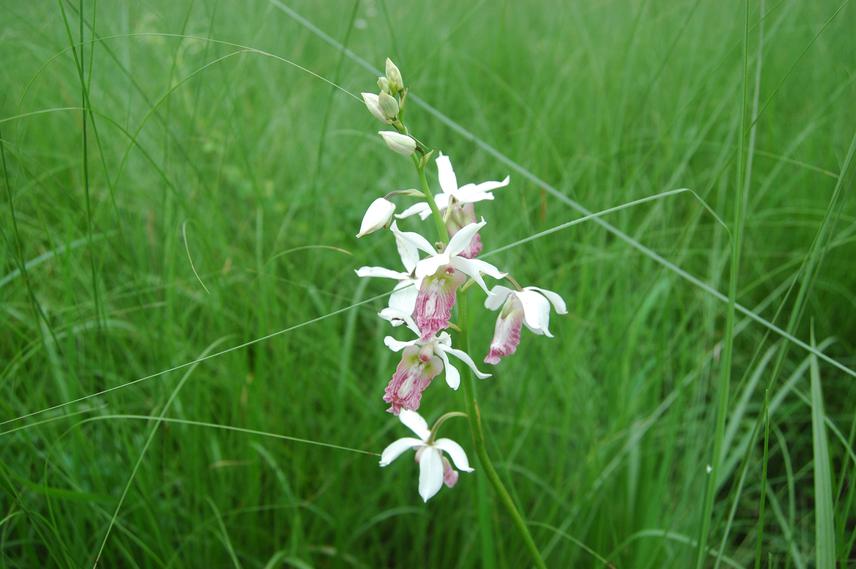 A plant at its habitat with bloomed flower.

Orchids are often the victims of habitat loss, degradation and fragmentation, as well as unsustainable collecting. In Bangladesh, Eulophia obtusa is under serious threat due to habitat loss and reduction in the number of mature individuals. This species was originally described from Uttarakhand in India (Lindley 1833); it has later been collected from the Gangetic plains by W. Bell, Mackinnon, Duthie and Inayat prior to about 1902.

The species Eulophia obtusa is currently on the verge of extinction due to agriculture conversion. No reliable data on its present status is available anywhere in the world including the site from where it was originally reported over a hundred years.

The only know habitat in Bangladesh will be preserved as wild land without further disturbance. In addition to that, wild sugarcane (Saccharum spontaneum) can be planted if it will not grow naturally, as the orchid is strongly associated with this grass. The habitat restoration and protection activities will take place throughout the project period.

In order to identify new areas field investigation will be conducted where the orchid may be found or to identify suitable habitats for future relocation of the orchid.

As this species is a seasonal grass like herb, natural history data will be collected from the seedling stage and will be continued till the plant dies in natural condition. Data on plant growth, pre-flowering stage, flowering stage, pollination flower morphology, identification of pollinators, fruiting, maturity time of the seed, germination capacity of seed etc. will be carefully observed and examined in natural condition.

After habitat restoration, plants will be relocated to safe areas for long-term genetic and live plant preservation through ex-situ conservation schemes in collaboration with government agencies.

Overall, the project will add value to the global knowledge on this species, possibly will help to determine its global status and will play a major role for its conservation in global context. Moreover, this project is the first of its kind in Bangladesh on ground orchid conservation.