Globally, birds are among the most heavily traded wildlife (Ribeiro, 2019). In the Indo-Nepal border as well the transboundary trade of wild bird is rampant (SAWEN, 2015). Nepal acts both as a source and transit for illegal wildlife trade including birds in South Asia. It is recognized for the booming market and trade route to China and other countries for illegal bird trade (Ahmed, 1997; Thapa & Thakuri, 2009). 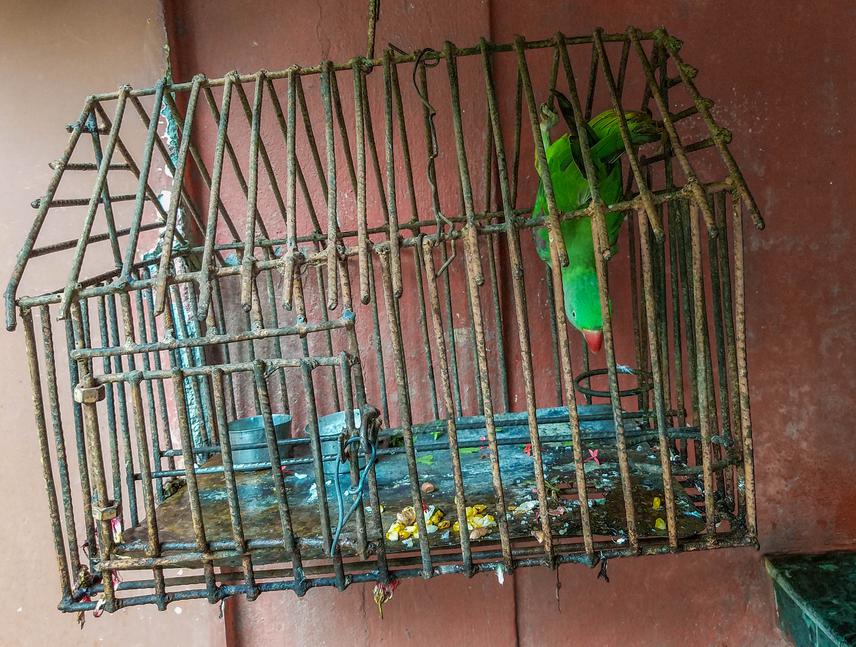 Alexandar parakeet kept as a pet.

Nepal Government and line agencies are working to curb the illegal trade in birds and have the legal provision of punishment up to NRs. 50 thousand or imprisonment up to 1 year or both. However, illegal bird trade is often neglected discourse in Nepal where most of the conservation attention goes to flagship species. Information like species composition and volume of trade, trade pattern, trade market (source, destination) and participants involved in wild bird trade is scanty. The dearth of such detailed information is creating difficulties for the enforcement authorities and conservation groups for their priorities and actions. Moreover, the public of Nepal does not perceive trading wild bird as an illegal activity.

Therefore, this project has been designed into two aspect – research work and public awareness around Kathmandu Valley (Thapa and Thakuri (2009) considered the valley to be a good market for the illegal bird trade). The first aspect of project i-e, research work aims to fill the data gap and the second aspect of project i-e, public awareness aims to raise awareness among the public via developing and disseminating awareness material. The information collected from the research will be crucial for advocacy, awareness and to inform proactive policy responses by government and conservation partners. Likewise, public awareness will be crucial for enhancing the legal understanding among the public and for discouraging them from getting involved in the illegal bird trade.