Hidden Inside the Mountain: How Threatened is Leafhopper Biodiversity Within Native Forests of the Sierra Madre Del Sur, Mexico?

Use of Leafhoppers as Biodiversity Indicators in Endangered Forests of the Sierra Madre Del Sur, Mexico

Native forests of the Sierra Madre del Sur (SMSr) harbor some of the highest levels of endemic biodiversity in North America but are threatened by human activities including urbanization, development and deforestation. This project will develop habitat quality metrics for these forests using leafhoppers (Hemiptera: Cicadellidae), a diverse group of insect herbivores with numerous species endemic to the SMSr. Data compiled through sampling of leafhopper diversity at different localities in the SMSr will document responses of leafhopper communities to different kinds of habitat fragmentation and disturbance and identify hotspots of diversity and endemicity that can be prioritized for conservation 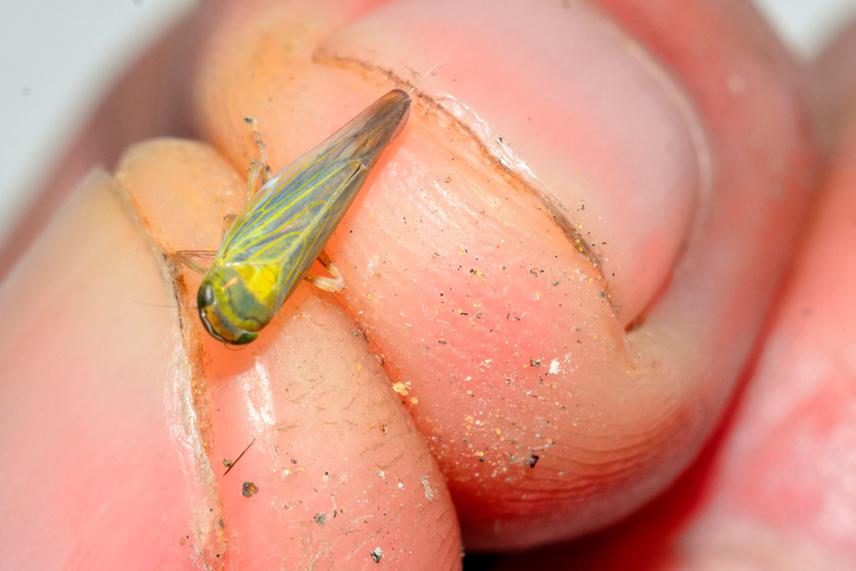 Leafhopper of the genus Knullana trapped by hand during sampling in Michoacán state. © Ricardo Arredondo.

Leafhoppers (Cicadellidae) are one of the ten biggest families with more than 22, 000 species worldwide. These tiny hoppers are strictly herbivorous and feed over several host plants in peculiar habitats, even can inhabit just one host plan during long cycle generations. The Sierra Madre del Sur in Mexico is a long terrain divided in three subprovinces (western, central and eastern) with five districts (Jaliscan, Jaliscan-Manantlán, Michoacán, Guerreran and Oaxacan Highland), mostly unstudied with high endemic biota including this insect family which depend on its floristic resources. Little is known about the conservation status of the forests enrolled with leafhopper biodiversity in such a region. This region is one of the most threatened ecoregions of Mexico and harbours diverse, endemic plant and animal communities, which invertebrate herbivores are the most diverse, but their conservation status remains poorly evaluated. Forests within the Sierra Madre del Sur, Oak/Pine Forest, Tropical Evergreen Forest, Tropical Dry Forest, and the Mountain Cloud Forest, are exuberant and widely mixed along its surface with rich and dense vegetation. Unfortunately, those are highly threatened by human activities and industrialization.

Terrestrial invertebrates such as insects are vastly under-represented on official lists of threatened or endangered species due to insufficient data on individual species, but recent metanalyses suggest that insect communities worldwide have suffered significant declines in recent decades. In the Sierra Madre del Sur we are fortunate to have historical baseline data on occurrences of many species of leafhoppers endemic to the Sierra Madre del Sur, which encompasses some of the most endangered plant communities in Mexico.

The project will focus on important coverage of the Sierra Madre del Sur, where we target several sites with high leafhoppers abundance and plant species richness. We will observe each sub province and district in the Mexican states of Jalisco, Michoacán, Guerrero and Oaxaca to gather a compressive understanding of general biodiversity patterns. We also aim to provide more complete data on the conservation status of the insect fauna and changes in biodiversity that have occurred in the region. The participation of local indigenous communities is essential to achieve the goals of the project and improving the protection of forest resources. Educational activities will be developed with those communities using materials related with leafhoppers and forest resources.