Ecology of the Yucatecan Cantil (Agkistrodon russeolus Gloyd, 1972) on the Northern Coast of Yucatán, Mexico

In this project, I will make a comparison of the home range, habitat selection, movement patterns and diet composition of the Yucatecan Cantil (Agkistrodon russeolus) between a population inhabiting a modified landscape (with house development, roads, coconut plantations) and a population living in a natural reserve (State Reserve Dzilam). Additionally, I will also make comparisons between subgroups (sexes, ages). My overarching goal is to answer how anthropogenic factors affect the survival of the species in the region. The results emanated from this project will be useful for decision makers to develop policies that improve the regulation of anthropogenic activities. My project will also provide important elements to obtain a more accurate assessment regarding the conservation status of this poorly known viper snake. 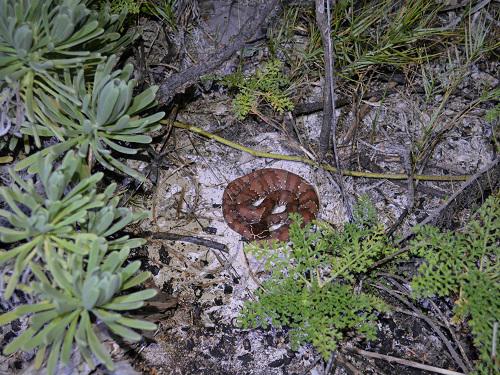 Terrestrial ecosystems along the coast in Yucatán, Mexico, provide important environmental services and are crucial habitats for many endemic and endangered species of plants and animals, including snakes. Alas, in the last decades, the alarming increase in anthropogenic development along the northern Yucatecan coast has resulted in the loss of more than half of the original territorial extension, which used to be covered by natural ecosystems, such as coastal dunes. These changes have been driven primarily by the unregulated expansion of coastal towns, hotel complexes, clandestine dumps, road construction, and coconut plantations.

In this project, I will generate for the ﬁrst time important information regarding fundamental aspects of the ecology of coastal populations of the Yucatecan Cantil (Agkistrodon russeolus), an endemic and endangered venomous snake species of the Yucatan Peninsula, a region of the Mexican tropics considered as relatively understudied with respect to its herpetofauna.

The aims of this study are to determine the home range, movement patterns, habitat selection, and diet composition of this species in a highly disturbed landscape (anthropogenic development) and in a natural reserve (State Reserve Dzilam) using radio-telemetry. The data obtained from this project will allow me to determine how anthropogenic factors affect the survival of the species in the region due to modification of available resources and space. Importantly, monitoring of these organisms will reveal their habitat preferences, the size of the area they utilize, and additional critical resources in its habitat, such as prey items. Consequently, these results will be useful for decision makers for the improvement of policies that regulate anthropogenic development in the region. Lastly, this project will also provide important elements to assess the conservation status of this species more accurately.