The primary goal of this research project is to identify spatial distribution, habitat requirements and conservation threats of Slender-billed vulture and community conservation campaign in Kaski. 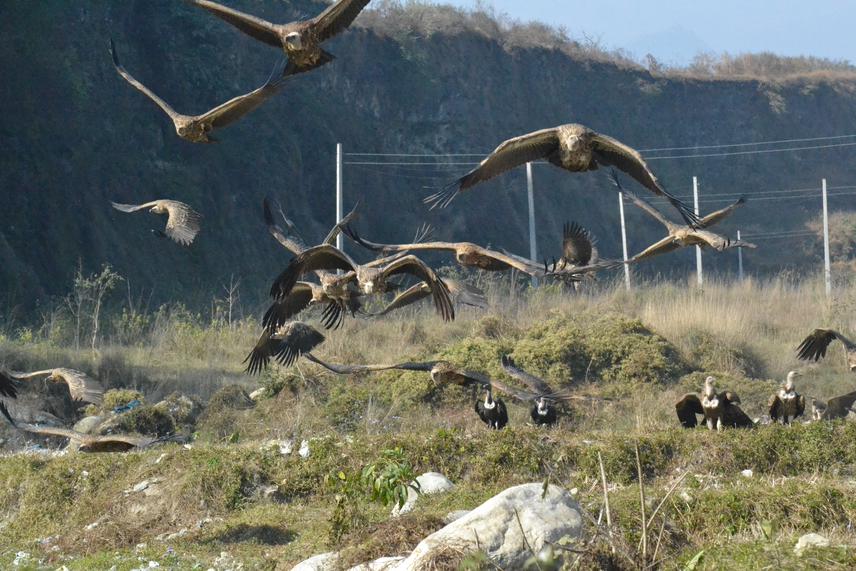 Among the nine vultures species of Nepal, Slender-billed Vulture Gyps tenuirostris is a Critically Endangered species suffered an extremely rapid population decline, particularly across the Indian subcontinent due to non-steroidal anti-inflammatory drug (NSAID) diclofenac, known to kill by renal failure. Between 1995 and 2011, population of Slender-billed Vulture (SBV) monitoring in lowland Nepal revealed declines of 96% (Chaudhary et al. 2012). In Nepal the estimated population of this species is below 50 (BCN and DNPWC 2011). There is lacking of current status of this species. In Pokhara valley there were seven occupied and four productive nests in 2006/07 breeding season, five occupied nests but no productive nests in 2007-08 and total breeding failure in 2008-09 and 2009-10 (Gautam and Baral 2010a). After that no any record of nesting around Pokhara valley even though good number of adult, sub-adult and juvenile encountered regularly during carcass feeding and foraging on dumping site and Vulture Safe Feeding Site, Ghachok.

Thus this project originated to study the spatial distribution of Slender-billed Vulture and effort to explore nesting site for ecological monitoring in Kaski. Still there are anthropogenic activities like habitat destruction, poisoning and illegal use of Diclofenac on cattle treatment. To reconcile this conflict community based conservation campaigns with massive awareness/advocacy is needed. We further unaware about habitat requirement and future threats for this species. Therefore, we desire to develop baseline data on habitat requirements, ecological status and participatory conservation plan on Slender-billed Vulture. This project aims to support the main goal of 'Vulture Conservation Action Plan for Nepal 2015-2019' and Manifesto chalked out by Saving Asia's Vulture from Extinction (SAVE) consortium.