This project aims at conserving a Critically Endangered frog (Conraua derooi) from an imminent extinction threat due to human consumption and habitat destruction in a West African forest. 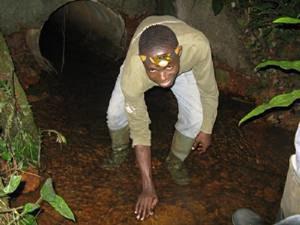 In 2005, a critically endangered frog (Conraua derooi) was rediscovered in Southern Ghana (Eastern and Volta). Until then, no confirmed records have existed for this species, for a period spanning almost 33 years since its description, although numerous suitable habitats were searched for it. Unfortunately, this newly discovered population faces seriously challenges and currently under imminent extinction threat due to human consumption and habitat destruction. Hence, preserving the remnant population of this species constitute a high conservation priority. This project aims at contributing to the conservation of this species by engaging in activities that will halt all known causes of decline to this species and provision of information for effective management. This will be achieved through awareness creation and involvement of forest fringe communities in habitat restoration efforts whilst concurrently collecting population level data for conservation planning and management. 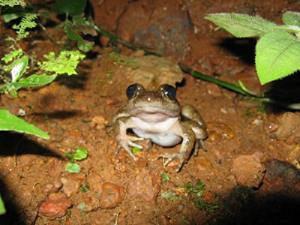 The study site is characterized by a unique ecosystem with exceptional species richness and high levels of endemism. It is located in south-eastern Ghana (6°12’24.7’’N, 0°34’37.2’’W) within the West African Forest zone. It is one of only two reserves in Ghana with Upland Evergreen forests and characterized by a unique ecosystems with exceptional species richness and high levels of endemism. Atewa also represents about 33.5% of the remaining closed forest in Ghana’s Eastern Region. It is home to many endemic and rare species, including black star plant species and several endemic fauna including Neaveia lamborni and Sapium aubrevillei, the Zenker’s Fruit Bat (Scotonycteris zenkeri), Pel’s flying squirrel (Anomalurus pelii), Copper-tailed Glossy Starling (Lamprotornis cupreocauda), Neolemonniera clitandrifolia and many more.

The Atewa forest is also one of Ghana’s Globally Significant Biodiversity Areas (GSBAs) based on its high botanical diversity and an Important Bird Area (IBA). Designation as a GSBA is equivalent to IUCN’s Category IV designation: a protected area designated mainly for conservation through management intervention (IUCN 1994). Hence, although our project focuses mainly on a single species, our habitat protection and restoration campaign will have long lasting nature conservation impact by directly benefiting several rare and endemic species which otherwise will be extirpated in this forest judging by the ongoing degradation rate.