Globally, an area of old-growth tropical forest larger than Madagascar was lost in the last two decades, and my country, Uganda, had lost almost all its forest before the turn of the century. Tropical forests are some of the most biodiverse areas on the planet and are particularly valuable as they store 55% of all forest carbon stocks. The value of forests to protect biodiversity and to mitigate climate change led the United Nation to coin this decade the “Decade of Restoration”. Efforts to meet calls for restoration needs to take a holistic approach and involve local communities. 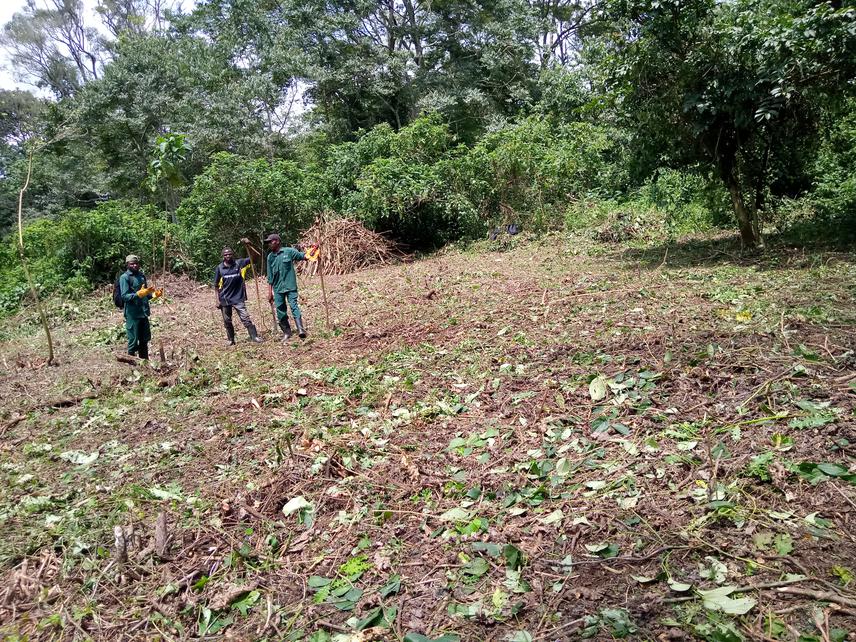 Three field assistants Robert Basaija (Left), Emmanuel Aliganyira (Center) and Tusiime Laurence (Right) who had been participating in the removal of Acanthus from a 20 m by 20 m test plot. © Opito Emmanuel Abwa.

I propose such an approach in Kibale National Park, Uganda. Large sections of Kibale were disturbed prior to the area becoming a park and now 3+ decades of research demonstrate that restoration efforts are stalled because the invasive Lantana camara and the woody herb, Acanthus pubescens inhibit forest regeneration. Extraction and manufacture of briquettes from Lantana/Acanthus and providing it affordably to the community around Kibale will contribute immensely to promoting forest regeneration, recovery of endangered plant and animal species, and improve community perception of the park, thus reducing the park’s human wildlife tensions. To bring the above challenges to scale, requires an exhaustive study.

The potential of forest regeneration with and without Acanthus/Lantana will require quantification of forest regeneration and primate, ungulate, and large mammal population changes and utilization of the area, while community perceptions before and after implementation of the project will be required to assess the community’s reaction. Achieving the above goals can be embodied in my PhD study and subsequent research. My Ph.D. mentors (Professor Colin A. Chapman, Dr Dipto Sakar and Dr Patrick Omeja) have a combined 58 years of research in Kibale and have worked extensively with the local community. With funding from Rufford, I hope to conduct the initial components of this research and start the long-term monitoring.

Header: A pile of removed Acanthus stems from a 20m by 20 m plot. © Opito Emmanuel Abwa.