The Revegetation/Restoration Project's aim is to stabilize the badly eroded hillsides along the Rio Chone which borders Bahia de Caraquez to prevent additional mudslides like those that devastated the city in 1997-98 and restore habitat. The project covers 8 kilometers, uses only native dry tropical plant species, and plays an integral role in the creation of Eco-Bahia, a sustainable region on Ecuador's central coast. 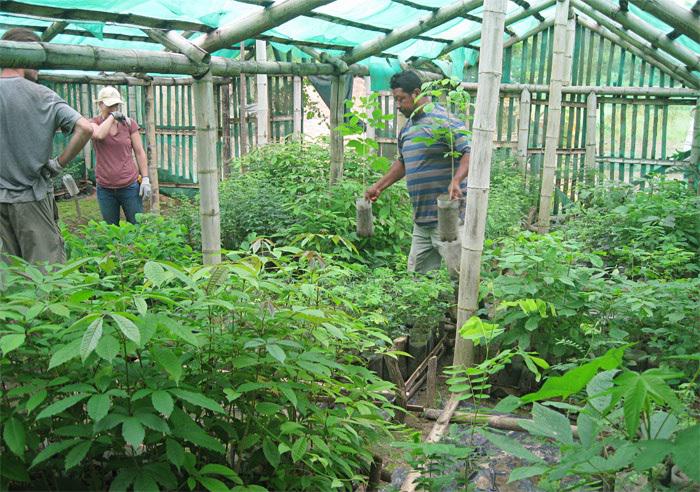 Bahia de Caraquez is part of the estuary of the Rio Chone where it flows into the Pacific Ocean. The hills became saturated with water during the 1997-98 El Niño heavy rains and whole hillsides came down into the city as devastating mudslides. This event was followed by a 7.2 earthquake.

Because the soil in Bahia de Caraquez and along the Rio Chone has little solid substructure, the solution has been to undertake significant revegetation projects using only native plant species, that hold the slopes of hills in place and cause rain to run off. The blades of Paja macho, a grass used in revegetating the first expanse we undertook to restore, lead water downhill and off the slope in a country whose clay soil-base holds up to three times its weight in water and, when overloaded, has created the massive mudslides that mark the Rio Chone.

For the past 11 years, PDF has been working to completely revegetate this 8 kilometer long continuous strip so that it serves as an erosion buffer and “wild corridor” of habitat for native plants and animals. (Many of the native species we plant bear fruit and provide an additional food source that residents can use for themselves and/or sell in the local market.) The work is:

1/Stabilizing the eroded hillsides in Bahia de Caraquez and along the Rio Chone to prevent further severe erosion and devastating mudslides.

2/Creating wildlife corridors of native dry tropical forest vegetation that link with extant forest to prevent erosion and restore ecosystems in this area. The sightings of a variety of native animal, bird and reptile species at our sites is a strong example of how hospitable revegetation can be to a wide array of wildlife even a few blocks from the heart of the city.

3/Providing hands-on experience in ecologically sustainable practices so that the residents can continue working from this base and build their own sustainable businesses.

5/Maintaining our ongoing partnership with the people and Municipality of Bahia de Caraquez and contributing to their efforts to create Eco-Bahia, a model for other cities throughout the undeveloped and developed world.

We have accomplished a great deal but more still needs to be done.