The Clanwilliam sandfish is South Africa's most threatened migratory freshwater fish. It can reach up to half a meter in length and undertakes seasonal migrations into tributaries to spawn. Once widespread throughout the Olifants-Doring River System of the Western Cape, South Africa, it now exists only in severely fragmented populations within the Doring River and a handful of its tributaries. Their primary threats here include predation by introduced alien fish and water over-abstraction resulting in drying rivers. Recent surveys indicate that the remaining sandfish population is receiving little to no recruitment, resulting in an ageing and declining population of large fish. 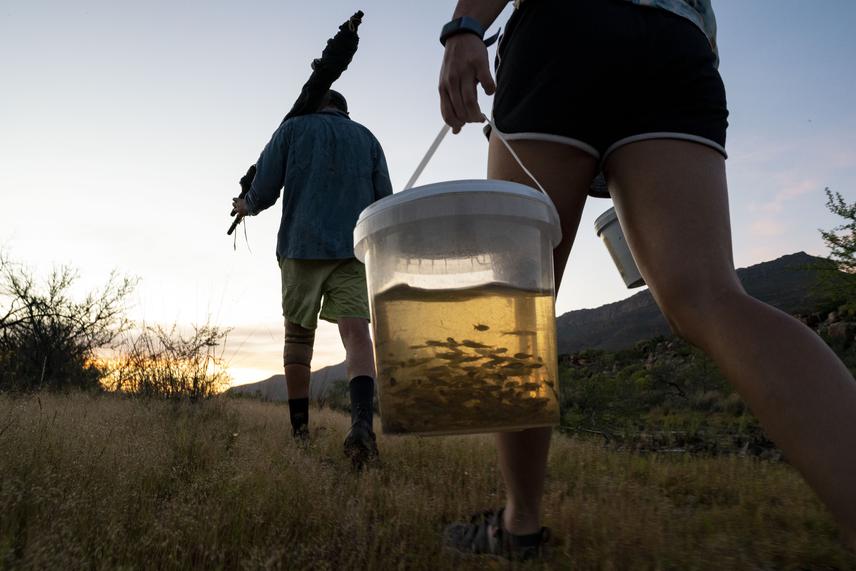 The goal of this project is to take on the scientific monitoring for the larger Saving Sandfish project, created to bring the sandfish back from the brink of extinction. Despite the species' Endangered status, very little is known about its biology and the extent of the threats it currently faces. Much of the project focuses around the Biedouw River, one of only two remaining tributaries where sandfish are still known to spawn. Here, we will be tracking the movement and habitat use of sandfish at different life stages to identify critical spawning and nursery habitats. We will also be analysing the diets of the invasive fishes in the system to better understand the threat they pose to the species. At the larger scale, we will be carrying out a comprehensive catchment-wide survey to produce updated distribution maps and population estimates of both sandfish and alien fish. This survey will serve as the basis for an updated IUCN threat assessment for the species.

Perhaps the most exciting part of this project is the evaluation of the recue-rear-release conservation intervention currently taking place. Young sandfish that hatch in the Biedouw River after the spawning migration experience extremely high rates of mortality. Mere months after hatching, the river stops flowing and young fish become trapped in isolated pools with predatory alien fish. Last year, the Saving Sandfish project rescued 7,700 juvenile sandfish and placed them in nursery dams, where they grow to predator-proof size before being released back into the wild. This intervention aims to boost the numbers of sandfish recruiting into the breeding size classes. Using Passive Integrated Transponder tags and a mark-recapture approach, we will monitor the health, growth and survivorship of rescued sandfish after being released. This will inform future conservation efforts and help us in our mission to save the sandfish.