Strengthening community understanding about the importance of MWHS through awareness and networking at community level and creating diversification of livelihood of fringe village communities to improve the economic condition and reduce dependency on forest resources of MWHS along with improving health of patrolling staff through medical aids. 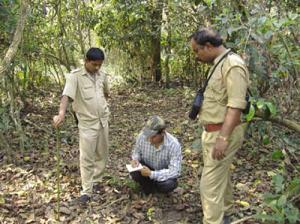 Researcher of Aaranyak giving hands on training to forest staff. 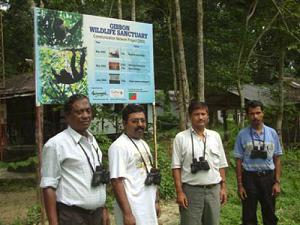 The Manas World Heritage Site is listed “In Danger” due to some of its lost attributes during the social unrest in the area. As a result of the social unrest, the protection mechanisms existed prior to social unrest period has shattered and as a result illegal killing of wild animals and smuggling of timbers have been found increased. Currently the social unrest is over, the forest staff has been geared up to fight with the anti-socials involved in wildlife poaching and timber smuggling for which the anti-poaching staff are getting support from the local communities and civil societies. The local communities and civil societies are coming forward to volunteer and act as conservation volunteers for making the protection regime more effective.

This project has been mooted based on the out put of the previous projects supported by FFI, RSG and suggestion and inputs received from the stakeholders to re-strengthen the initiatives to ensure active involvement of the fringe village communities to revive MWHS. The department of forest, govt of Assam in collaboration with various NGOs trying to reintroduce some of lost heritage attributes of Manas like rhino. However in such project local community involvement does not get priority. Hence this proposed project will complement the effort of forest department in re-building the MWHS through strengthening local communities. The main focus of the project is to create awareness among general people, diversified livelihoods and health aid to conservation volunteers.