The main objective of this project is to characterize black rhino habitat use in the Kunene Region, northwest Namibia; based on a local scale vegetation study. This will aid in determining suitable habitats for potential re-introduction sites. 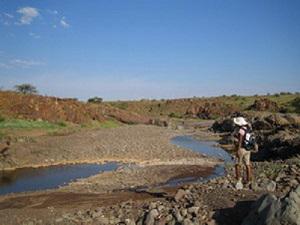 Basilia, searching for the sampling point along one of the major river ( Uniab River).© Jeff Muntifering

The Kunene Region in Namibia holds the largest unfenced population of black rhinos (Diceros bicornis bicornis). Historically, the black rhino in Namibia was once widely distributed across Kunene Region. Currently a high percentage of Namibia’s black rhino is concentrated in some areas, residing in the northwest, between Ugab and Hoarusib River. A need has been identified to re-introduce black rhinos in their past historical range. 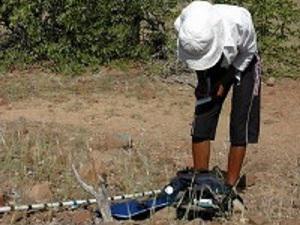 To date, Save the Rhino Trust (SRT) has location data for individual rhinos in the northwest and large scale descriptors of habitat. However, rhino locality records within their water and human limited range do not necessarily provide a clear picture of habitat use. A couple of studies have shown the influence of browse availability of black rhino’s distribution, but no studies have been done to determine a detailed local scale, habitat use and suitability through biophysical assessments. Therefore the main objective of this study is to characterize black rhino habitat use and suitability within their current range based on a local scale vegetation study. The specific objectives are to determine and compare tree and shrub density, plant diversity and composition, tree and shrub height and investigate the influence of terrain (slope) structure on habitat use by black rhinos. The other objectives which will form part of the study is to investigate the distance of rhino use areas from water and human settlement The project will benefit Save the Rhino Trust (SRT), communal conservancy, Ministry of Environment and Tourism and as well as the tourism industry in general.

The project is a re-introduction implications, thus it will aid in determining suitable habitats for black rhino in potential re-introduction sites. The project would also result in establishing a means of rapidly monitoring black rhino habitat, which can be incorporated into Save the Rhino Trust (SRT) monitoring program. Moreover, the study will add to the much needed vegetation data base.