Research and Conservation of Steppe Eagle (Aquila nipalensis) in Kalmykia

The steppe eagle is the most typical large bird of prey of steppe landscapes. In the past, this species was the most dominant eagle of North Eurasia where it inhabited the territory from the lower reaches of the Danube to east China. Today the steppe eagle is classified in the IUCN Red list of Threatened as Endangered globally and Critically endangered in Europe. According to the latest monitoring, the number of the steppe eagle in the Republic of Kalmykia was estimated on average at 527 breeding pairs, which is a significant share of the European population of the species. The number of the current eagle population and their high breeding potential allow considering Kalmykia an important region for preserving the species. 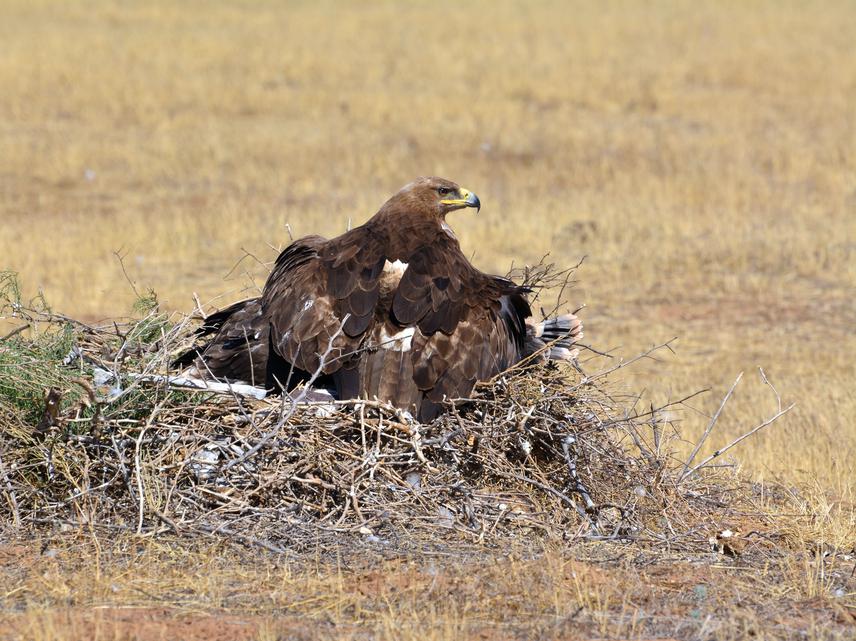 In Kalmykia, the steppe eagle most often nests under the conditions of open semi-desert right on the ground among plant stands. The main condition of eagle breeding is the abundance of the little ground squirrel – their main prey. That’s why the area of species in Kalmykia is limited to the regions where traditional grassland farming is actively developed. However, because of the stereotype of ground breeding, the eagles often suffer from the destruction of nests and hatches in steppe fires, as well as from shepherds and livestock disturbing them. Moreover, in Kalmykia, steppe eagles like other birds of prey massively die from electrocution on distribution lines.

The major goal of our project is to create a program for long-term monitoring and species conservation in Kalmykia. To understand the current situation, we’ll monitor a large grouping of steppe eagles (about 100 pairs) in the territory of Sarpinsky, Kharbinsky, and Tatal-Barunsky wildlife sanctuaries. To study the migration paths and global species protection we’ll tag fledglings with GPS satellite transmitters. To protect the birds from electrocution we’ll take inventory of bird-hazardous distribution lines and account of birds that died on them. These findings will be used in negotiations with distribution companies and authorities for immediate equipping of lines with bird-protective devices. Moreover, we expect to increase the breeding success of steppe eagles due to their attraction to artificial nests on platforms for breeding.

We use acquired information in the course of an educational campaign for raising public awareness about the species biology and main threats to eagles. Teaching classes at school, working with the community boards of settlements and meetings with farmers will help us win the support of local citizens, as well as attract persons concerned in taking part in our project.