Understanding the Recovery of Coastal Vegetation and Soil Processes at the Uplifted Sites of Andaman Islands: A Way Forward for Restoration

The tectonic uplift in North Andaman linked to the 2004 Indian Ocean tsunami resulted in reef bed exposed out of the water and mangroves deprived of tidal flooding. The seawater deprived mangroves have eventually die-off and opens up vast area for the colonization by different communities. At these peculiar sites, we are investigating the underlying processes of vegetation colonization and soil responses to improve the knowledge of natural recovery process fallowing the large-scale natural disturbances. The data collected on plants and soil will form the baseline for predicting the future course of the recovery process. Additionally, the spatial maps will be developed to depict the potential restoration sites for mangroves and terrestrial forests with their ecological details (e.g. plant species composition, propagule availability, and soil conditions). The outcomes of this project will be useful to accelerate the ecosystem recovery process in the Andaman Islands and similar sites elsewhere. 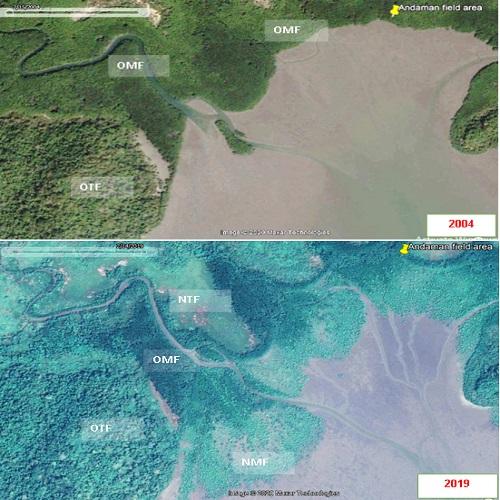 The time series satellite images available at Google Images showing the seaward movement of vegetation after the tectonic uplift at Aerial Bay in North Andaman.

The Sumatra-Andaman earthquake followed by the 2004 Indian Ocean tsunami has intensively damaged the coastal ecosystems across the Andaman and Nicobar Islands. The topographic changes in the archipelago due to tectonic subsidence and uplift had further degraded the ecosystems affected by the tsunami. The uplifting of landmass up to 1.35 m in the Northern Andaman resulted in retreating of the sea led to corals being exposed out of the water and degradation of mangroves as they no longer receiving enough tidal flooding. Meanwhile, the land drowning up to 2.85 m in the South Andaman and the Nicobar Islands led to an opposite scenario, where, the intertidal zones got permanently inundated, thus killing all the mangroves and establishing new intertidal zones at sites that were previously terrestrial zones.

The ecosystems deprived of tidal flooding (mangroves and coral reefs in the uplifted areas) or receiving inappropriate tidal flooding (terrestrial forest in the drowned areas) have opened up opportunities for the colonization of different communities. The establishment of new ecological communities in the subsided areas are well documented. While the seaward progression of terrestrial and mangrove forests in the uplifted sites remains mostly unknown.

The colonization of new plant communities at such degraded habitats is yet unknown, moreover, many such degraded sites are still devoid of vegetation. Therefore, we intend to study the natural colonization of vegetation and linked soil processes in the habitats affected by tectonic uplift across the North Andaman Islands. The overall goal of the project is to improve the knowledge of ecosystem recovery following large-scale natural disturbances. Such a knowledge can greatly help the restoration programs targeted to accelerate the ecosystem recovery process.