Impacts of Climate Change to West African Green Turtles I

Our main goal is to support and expand the conservation of marine turtles in Guinea-Bissau, West Africa. The specific aims of this project are:

1. Establish strong collaborations with members of local communities and start a participatory monitoring and protection program at a key sea turtle nesting beach, located at northwest of mainland Guinea-Bissau, in the region of Cacheu, and contribute to raise the awareness and capacity building among the local communities.

2. Create a series of micro-movies on the participatory conservation work and scientific research for sharing via e-mail, on social media, on our website, and at international meetings/fora, etc., to raise awareness and broaden conservation partnerships for the future conservation of sea turtles.

We will also continue to provide support for the ongoing monitoring and protection of the major nesting beaches at the Bijagós Archipelago, Guinea-Bissau. 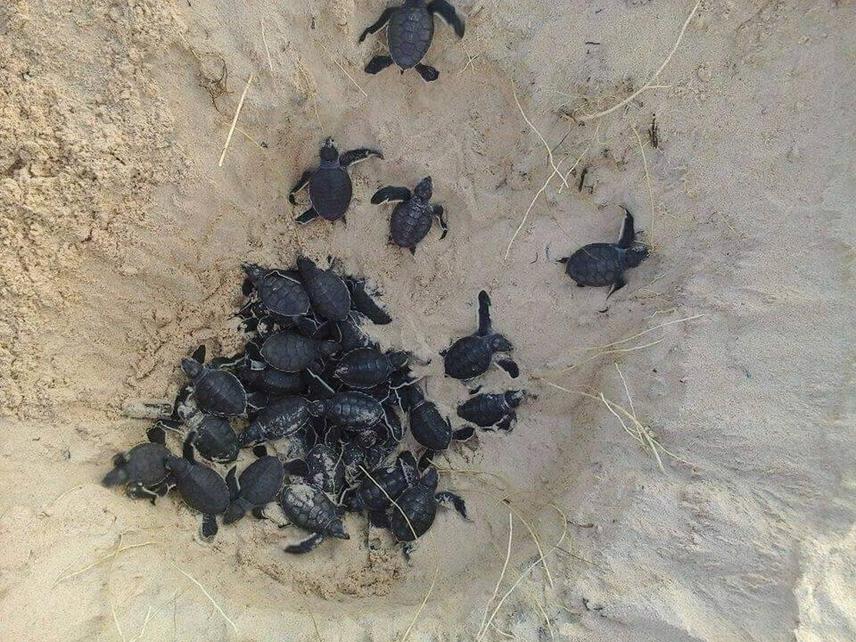 Guinea-Bissau is of major importance for marine turtles, hosting the largest green turtle Chelonia mydas rookery in Africa, top six worldwide. Nesting of olive ridley Lepidochelys olivacea, hawksbill Eretmochelys imbricata, and leatherback Dermochelys coriacea turtles is also common, although the last two occur in small numbers. Loggerhead turles Caretta caretta can also be seen foraging in the waters of Guinea-Bissau. Most nesting occurs at the Bijagós Archipelago, where we have established a monitoring protocol, allowing the collection of important data for the knowledge and management of sea turtles, and assuring protection from poaching at the major nesting beach, at Poilão Island (10.8º N, 15.7º W). However, important nesting also occurs in the mainland and currently there is no protection in place there.

In northwest of mainland Guinea-Bissau, in Varela, region of Cacheu, there is a key nesting area mainly used by green turtles, but also by the critically endangered hawksbill turtle. About 25km of sandy beaches stretch from the mouth of the Cacheu River to the Senegalese border. Several are on barrier islands and others are on the mainland. The region is populated by the Felupe/Jola ethnic group. At least some people in this group did not consume turtles, but recent behavioural changes are discontinuing this tradition, requiring an urgent intervention.

Within the nearby communities we have identified collaborators passionate about participating in conservation and monitoring campaigns. After a training session these collaborators will conduct daily beach surveys and night patrols. We believe from our experience at the Bijagós, and from talking to the community members, that the presence of a team at the nesting beach will halt poaching. As with our previous projects, one main contribution will be the capacity building of local community members, some of which may integrate the IBAP team as full-time employees.

Additionally we are looking for strategies to communicate the conservation work implemented by the Institute of Biodiversity and Protected Areas of Guinea-Bissau (IBAP- GB). One of this strategies will involve the creation of micro-movies to broadcast widely. We expect that this project will contribute to the sustainability of sea turtle conservation in Guinea-Bissau, through the advertisement of its spectacular marine turtle populations and habitats, the successful conservation actions (e.g. at Poilão), and the capacity built of the national conservation staff (past successes include two MSc, and two collaborators hired by the IBAP as full-time employees).

Press release regarding the project.

In the study, researchers tracked 45 female green turtles from Poilão Island, in Guinea-Bissau’s Bijagós Archipelago, which hosts the largest population for the species in the Eastern Atlantic Ocean.

The tracked turtles were found to spend most of their time during nesting and foraging periods inside the MPA network.

However, just 21% of key "migration corridors" are protected.

The study was carried out by a team of researchers from the University of Exeter (UK), MARE - ISPA, Instituto Universitário (Portugal), the Institute of Biodiversity and Protected Areas (Guinea Bissau) and the Banc d'Arguin National Park (Mauritania). Additionally, young people from the local Bijagós villages were engaged in fieldwork activities.

"RAMPAO is a great example of an MPA network, with good connections between the MPAs and strong links between the organisations that oversee them," said Dr Rita Patrício, of the Centre for Ecology and Conservation on Exeter's Penryn Campus in Cornwall, and MARE.

"West Africa has very rich marine ecosystems. Conservation efforts in the region were initially focussed on key habitats, such as seagrass beds, mangroves and estuaries and intertidal flats, which are used by populations of global importance of coastal and seabirds, and by charismatic species such as humpback dolphins, West African manatees and green turtles.

"Our study is part of wider efforts to discover where species are distributed in the region, to ultimately find the most effective ways of protecting them.

"It is essential to understand the connectivity between these areas, to estimate the level of protection, and to ensure that conservation efforts on breeding sites are not cancelled out by a lack of protection at feeding sites, and vice-versa.

"In the case of green turtles, our study shows the MPA network in the region covers almost all marine areas used during the nesting period and most feeding areas too. This is hugely encouraging.

"Our finding that most key corridors used by the turtles currently fall outside the MPA network suggests there is an opportunity to increase protection even further."

During the nesting period, turtles spent an average of 95% of their time within the limits of the MPA network, and among the 35 turtles successfully tracked into the foraging period, 28 of them used waters within MPAs.

Dr Patrício said green turtle populations in this region "look stable" – but this is "conservation-dependent".

"If you remove the conservation effort, the population could drop very quickly," she said.

The United Nations global target to protect 10% of the world's ocean by 2020 was not achieved, but the coverage of protected areas is increasing – and there are now calls to protect 30% of the ocean by 2030.

Balancing marine protection with the needs of human coastal communities is vital, and Dr Patricio said a key goal is to bring all parties together to improve conservation in a way that works for people and ecosystems.

Funders of the research included the MAVA Foundation, the Regional Partnership for Coastal and Marine Conservation (PRCM), the La Caixa Foundation and the European Commission.

The paper, published in the journal Frontiers in Marine Science, is entitled: "Green turtles highlight connectivity across a regional marine protected area network in West Africa."

Acknowledgments This project has received funding from the European Union’s Horizon 2020 research and innovation programme under the Marie Skłodowska-Curie grant agreement No 766417.