The aims of this project are to (1) evaluate the impact of these conflicts on otter survival and to suggest sustainable conservation strategies and (2) to provide some tools and guidelines allowing the awareness and support to fishermen as well as reforestation actions for the sustainable management of the species. 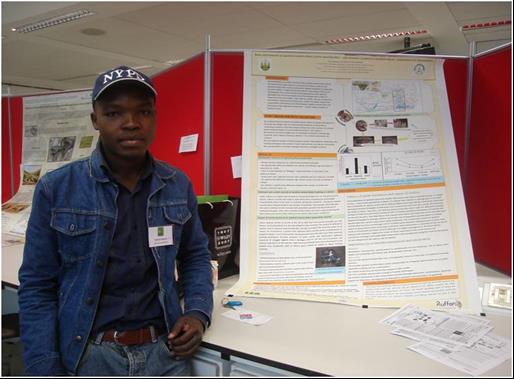 Presentation of my poster at Conservation Science Conference, March 2008

Otters are very poorly known species in most parts of Africa especially in Benin. This is due to the specificity and low accessibility possibilities of their habitat (valley, rivers), their behaviour, the difficulty to capture them and the lack of specific census methods. A study carried in 2004 by the Laboratory of Applied Ecology in Benin showed that:

(1) human – otters’ conflicts are the major factors which explain threats on wetlands and affect otter’s survival;

(2) spotted necked otters (Lutra maculicollis) are highly endangered in Benin’ wetland and extinction could occur if the current threats are maintained.

In Benin wetlands, otters are highly threatened because they are in conflict with human population. They destroy fisheries traps and gears and reduce quantitatively and qualitatively fishermen harvests. Local communities developed and improved each year many little selective hunting techniques, increase pollution of water points and overexploited wetlands resources to struggle against otter’s damages.

However, ecological friendly techniques for otters’ damage control are developed by few fishermen. Considering the urgent need of wetlands’ wildlife conservation especially spotted necked otters’, the project is designed to assess social and environmental impacts of the conflict, to evaluate and promote ecological friendly techniques in a large scale, to involve population in the conservation process through awareness, sensitization, symbolic support to fishermen and restoration of wetlands with medicinal plants which will further be useful for communities. Collaboration with the “Otter Specialist Group” will help to discuss about possibilities of long term funding and technical support for the implementation of otters’ conservation plans which will be discussed through this project in Benin and West Africa.

The results and experiences gained through this project will be shared with other scientists and conservationists involved in the small mammals networks. We are planning that the results of this project be presented and discussed at the next round of the IUCN 11th International Otter Conference which will be held at Italy and the next round of African Small Mammals conference.