The dama gazelle (Nanger dama) is one of the most endangered antelopes on earth. The wild population is estimated to be inferior to 250 adults, but it might as well be between 85 to 120 animals (RZSS and ASG 2014, IUCN Antelope Specialist Group 2016) and is limited to four sites in Chad and Niger. The four sites are isolated and the connection between them is considered very unlikely (Addax and dama Gazelle Regional Action Plan, 2018-2022). The species is currently classiﬁed as Critically Endangered (IUCN SSC. 2016) and urgent conservation actions are needed. 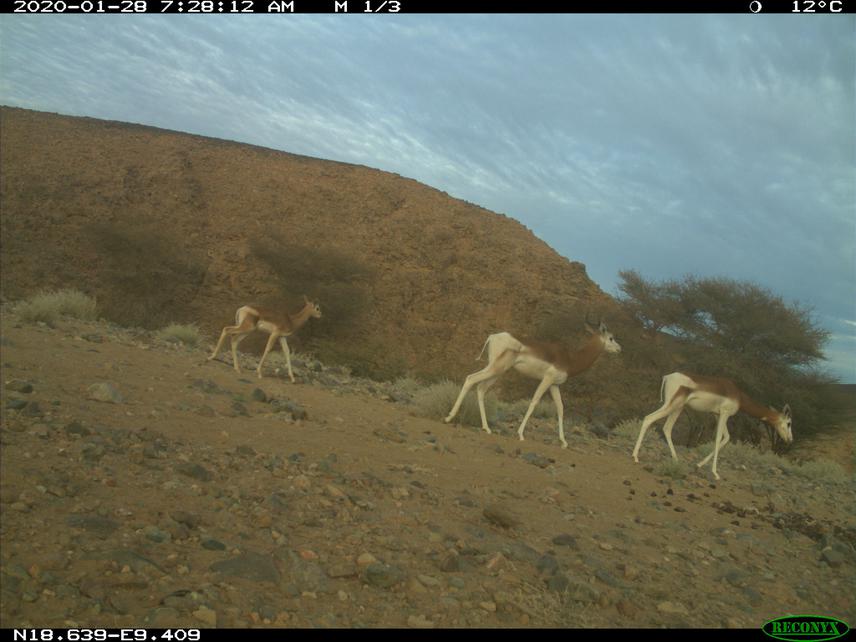 Three dama gazelles, including a calf, captured by one of the camera traps set by SCF on Takolokouzet mount. © Abdoul Razack Moussa Zabeirou

The decline in numbers of dama gazelle may be largely attributed to decades of hunting, exacerbated by habitat loss and the impact of droughts. However, few monitoring and targeted conservation activities had been carried out in the country and the current knowledge related to this species is limiting the implementation of eﬃcient conservation actions. This project aims to participate in the reduction of the knowledge gap by providing updated information on the species and its habitat. It will focus on determining the conservation status of the dama gazelle metapopulation and study the use of the habitat in one of the two last strongholds of Niger: The Takolokouzet massif, located in the The Aïr and Ténéré National Nature Reserve (ATNNR).

Ecological monitoring missions will provide diﬀerent types of data, such as direct and indirect observations, that will be compared with the ones from the previous years obtained with the same protocol and will therefore enable the detection of any change in the population distribution or number. Conjointly, the human dimension study to be conducted in the camps located close to Takolokouzet mountain, among a minimum of 100 randomly selected interviewees, will help identifying the community knowledge on wildlife and the targeted species in the area, while providing valuable information for the long-term management and conservation of dama gazelles. Finally, the photo from the 12 camera traps installed on Mount Takoulkouzet from 2017 to 2020 will be processed and analysed in order to identify the dama gazelle critical habitats so that management can be undertaken, and human disturbance minimized. A coherent dataset to share with Nigerien government and partners.