The project aims to identify the conservation status and the potential impacts of habitat alteration and avian malaria on the endemic birds of the Louisiade Archipelago. 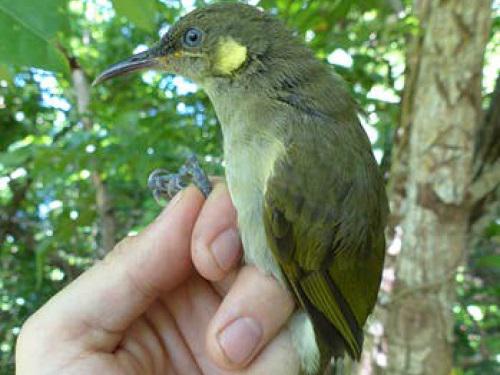 Islands often support high levels of endemism, either relict species or those generated through the effects of isolation and selection in unique insular ecosystems. These features can make island species susceptible to the changes associated with human activity. Loss of habitat and introduced predators, competitors and parasites negatively influence the success of different life history stages and reduce the effective population sizes of specialised endemic species. This has led to island endemic species representing the bulk of the bird extinction record.

The Louisiade Archipelago of Papua New Guinea supports 4 of the world’s remaining 60 Data-Deficient bird species (DD-IUCN Red List), the most in any Endemic Bird Area globally. Climate change, rapid human population growth, increased resource use, and changing perspectives toward the natural environment are all impacting on biodiversity in Papua New Guinea. The islands of the archipelago largely lack altitudinal refuge and none of the species are montane endemics, as often found on other Pacific Islands. This increases the threat to these species from such changes.

This project will specifically target the effects of habitat change and avian haemosporidian parasites on island endemic birds, especially the endemic DD bird species of Sudest Island i.e., Tagula Butcherbird (Cracticus louisiadensis), Tagula Honeyeater (Meliphaga vicina) and White-throated White-eye (Zosterops meeki). Species habitat associations will be identified and a habitat change analysis conducted for the last four decades. An assessment will be made of the role of haemosporidian parasite lineages infecting the avifauna and of the interactions among the levels of haemosporidian parasitism, host endemism and habitat disturbance. Importantly, the project aims to establish monitoring sites and engage community members to provide opportunities through long-term conservation research in the islands.

The findings will make a significant contribution to the global knowledge base for preventing endemic species extinctions from islands and will reduce the number of DD bird species globally by five percent.