Aggregation, Movement Dynamics and Feeding Habits of the Short-Toed Snake-Eagle in Relation to Agricultural Activities in the Judean Slopes

This project will investigate the effect of agricultural practicing and prey availability, on shaping the Short-toed Snake-Eagle movement and behavior. 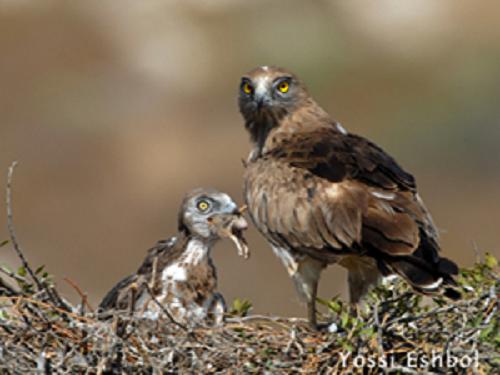 Aggregation is a dynamical situation induced by food being scarce, patchy, unevenly distributed or unpredictable, and is shaped by human made disturbances or fires. Most studies on aggregation phenomena were mainly in the context of social influences on foraging or on prey behavior, but almost no study has focused on movement dynamic questions, in relation to bird aggregation, breeding, migration, food abundance and long term and short term habitat disturbance together. 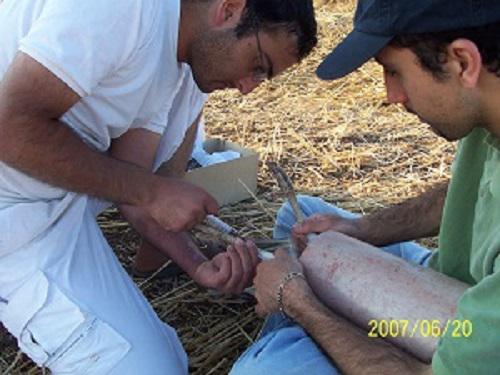 In the proposed study I will address the above questions, using a non colonial summer visitor/ passage migrant raptor that feeds mostly on reptiles, which I found to have a spatio-temporal large aggregations, where main prey is rodents (both trends never documented for this species before!), by following agricultural activities, mainly ploughing: The Short-toed Snake-Eagle (Circaetus gallicus). I will investigate the effect of agricultural practicing and prey availability, on shaping the Short-toed Snake-Eagle movement and behavior. 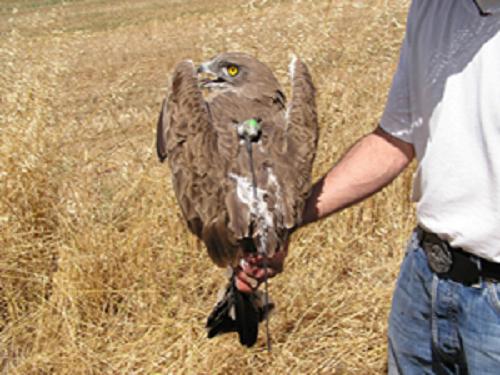 Sameh Darawshi (from right) and Amihod Nao'r (from left) holding a Short-toed Eagle that was trapped in the fields of the studied area and marked with color rings and with dyes on its wings, for monitoring purposes. © Yotam Lehnard.

My observations suggest that this species, an eagle that its population in Israel seems to be steady or even increasing, but decreased through most of its north European ranges in the past, studied mainly on its nesting site, previously considered to be an almost exclusive feeder on reptiles, specially snakes, may serve a unique case study for investigating both local and large scale movement patterns. Thereby, this study will provide better understanding of a relatively poorly-studied species along with better knowledge of decision-making, behavior and spatial patterns in the context of human related interferences and aggregation in raptors. The research will be conducted through surveys, field observations, marking techniques, radio tracking and satellite tracking of the Short-toed Eagle.

This study will emphasize the importance of Israel and its neighboring countries to their Short-toed Eagle summering and passage migrant populations and will clarify the potential of this raptor as a beneficial biological controller of rodents and its vulnerability to pesticides, hence, offering new criteria for its protection. In the Middle East, the Short-toed Eagle is the most common eagle, having a great symbolic value, and its study is planned to bridge between different nations, especially Israelis and Palestinians, through research, education and joint forces, stressing its flexibility, boundless mobility and beauty.