Protection of Populations of the White-Tailed Eagle, Imperial Eagle and Greater Spotted Eagle

The aim of the project: Protection of populations of the White-Tailed Eagle
(Haliaeetus albicilla), Imperial Eagle (Aquila heliaca), Greater Spotted Eagle (Aquila clanga) by reducing the rate of bird deaths through electrocution on overhead power lines near their nesting grounds and establishing the protected forest areas, where nests of these species are located on the territory of the Republic of Tatarstan. The project will also be greatly conductive to the presentation of the other species of birds dying because of the power lines. 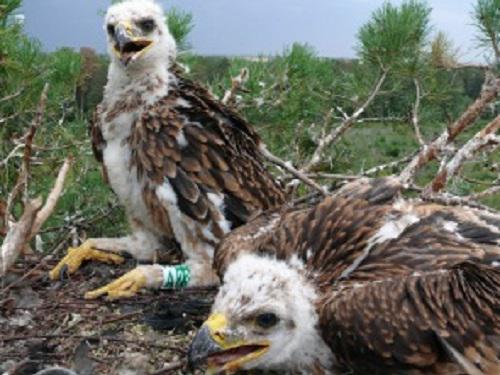 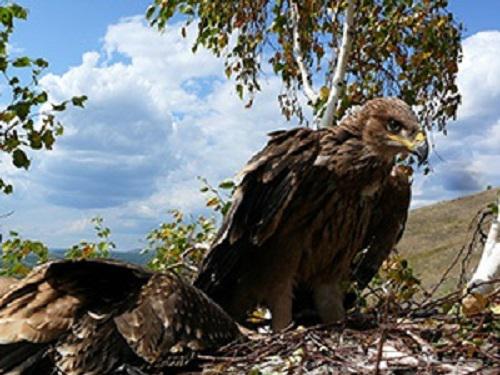 Imperial Eagle nestlings in the nest.

Data processing will be conducted since October 2011 to April 2012 and since October 2012 to December 2012. Interactions with electric utility companies, the Ministry of Environment and Natural Resources on the problem of bird electrocution and retrofitting of power lines with bird protective devices will be conducted also in these dates. Basing on the data obtained on the breeding grounds of eagles the recommendations on establishing the protected forest areas will be developed.

Within the framework of the project there will be made some statements in local newspapers and on the web sites of the National Park and some ecological centres of our region («The Volga Region Club of Birds Lovers», the ecocentre «Dodo»). All the material gathered during the work will be shown at photo exhibitions in several cities of the Republic of Tatarstan and of course, in the museum of our National Park.The results of the surveys will be published in the journal «Raptors conservation».

Besides one will be able to find all the materials on the web site of National Park «Nizhnyaya Kama» - www.nkama.my1.ru.It is planned to organize a series of lectures for the students of KFU (Kazan Federal Universitu), KFEEA (Kamsky Federal Engineering and Economies Academy), KFAU (Kazan FederalArchitectural University), Yelabuga Federal Pedagogical University, The Institute of Social-Pedagogical Technologies and Resources in Naberezhnye Chelny. Two students are involved into the research. The realization of the project is planned to fullfil from May 2011 to December 2012.