Endemic to Africa, the Southern Ground-hornbill (Bucorvus Leadbeateri) is one of the most iconic avian species that occur in Sub-Saharan Africa. The species is ecologically important as a top-order predator and culturally significant as a bringer of change. The populations of Southern Ground-hornbills (SGH)in all range states are in decline, with the species globally classified by the IUCN as Vulnerable and locally in South Africa as Endangered. Approximately 60% of the Southern Ground-hornbill population occurs in the Greater Kruger National Park, with the remaining 40% occurring in rural communities, private land, and agricultural land. The rapid decline in numbers outside of protected areas in South Africa is attributed to myriad anthropogenic threats that include lead poisoning, persecution, electrocution, secondary poisoning, and habitat modification. 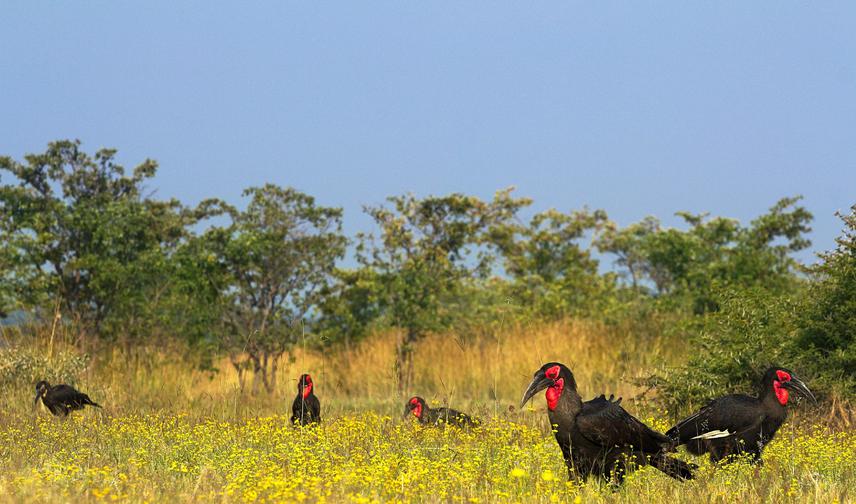 A group of Southern Ground-hornbills foraging in their natural habitat in the Limpopo province of South Africa. © Heinrich Nel

The population of SGH within the Kruger National Park (KNP) is at capacity, with every available territory (100-200km2) occupied by a ground-hornbill group. This implies that for new groups to be formed, birds must disperse outside of this protected area. However, sightings data on the species in the areas west of the KNP boundary have been minimal. Thus, this study seeks to examine the status of Southern Ground-hornbills in these areas and determine which factors are limiting the species' expansion in this area. This has been deemed a national priority by the National SGH Working Group and will complement other conservation actions that are currently being implemented to increase the species’ range and numbers within South Africa. I will examine the perceptions of the different human language groups within this area towards Southern Ground-hornbills, as well as assess potential habitat within various land-use types for suitability for the species, based on its requirements. I will test conservation tools such as the provision of artificial nest boxes and ultimately provide recommendations on how SGH can be supported to expand into these areas.