The overall goal of this project is to understand and reduce the threats pending over taxa in Termitomyces from central Côte d’Ivoire. 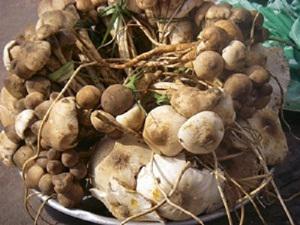 Macrotermitinae/Termitomyces mutualistic relationship, the most common and presumably primitive mode of reproduction for the symbiotic fungus is to produce sporophores (fruit body) reaching the surface of the host termite mound during the rainy seasons. Termitomyces constitutes are highly appreciated and very much sought after food source in the entire tropical African region. 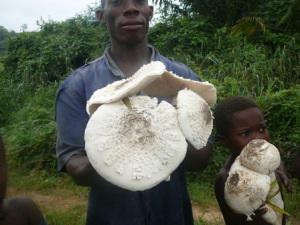 Harvesters at the vicinity of a forest fragment.

In their main occurrence zone in Côte d’Ivoire (extend savannah-forest boundaries, from the Eastern to the Western part of the country), they are declining in abundance and diversity from year to year, due (1) to their bad and uncontrolled harvest for consumption (trade) and secondly (2) to the increasing reduction of their living habitats mainly attributable to forest fragmentation, shifting slash-and burn cultivation and extensive farming. The pressure on Termitomyces is intensified as local people tend to harvest them as early as possible, even before the caps (pileus) of the sporophores are open and the sexual spores fully developed. For local people sporophores also appear at a crucial moment of the rainy season, i.e. when food stocks are dwindling and when the new crops are not at full maturity. Unfortunately, until now accurate information does not exist on their vulnerability status and the necessity of the conservation of their living habitats.

The project specifically aims at

(i) generating quantitative data on their actual diversity, abundance, distribution and habitats characteristics.

(iii) elaboration of conservation strategies for Termitomyces species, host termites and their habitats,

(iv) raising public awareness through campaigns with pupils, collectors, sellers and purchasers of these mushrooms (v) analysing options for production in disturbed habitats and promoting the consumption of other successful domesticated edible species as an alternative.

Raising awareness for their sustainable exploitation through good harvesting methods and protection of their habitats against bad agricultural practices can insure (i) a long lasting conservation of these fungi and their host termites and (ii) success to this project. In addition, quantitative data related to the abundance, frequency, number and size of habitats will allow assessing efficiently and accurately the conservation status/categories of Termitomyces following criteria of IUCN (2001).