The research will focus on collecting taxonomical and ecological data in order to create a preliminary biodiversity database of hawkmoths in Bidoup Nui Ba National Park, which is very important for future conservation actions. Four main conservation output including: (1) An annotated checklist of hawkmoths species in Bidoup Nui Ba will be reported and discovery and description of new species, new subspecies or new records to the country and science (if present); (2) Ecological data including Information about flight-time, preferred habitat and abundance season of hawkmoths, since then the role of protected forest for species conservation will be pointed out; (3) raising improve the local people's awareness on natural resources and protection of hawkmoths habitats. 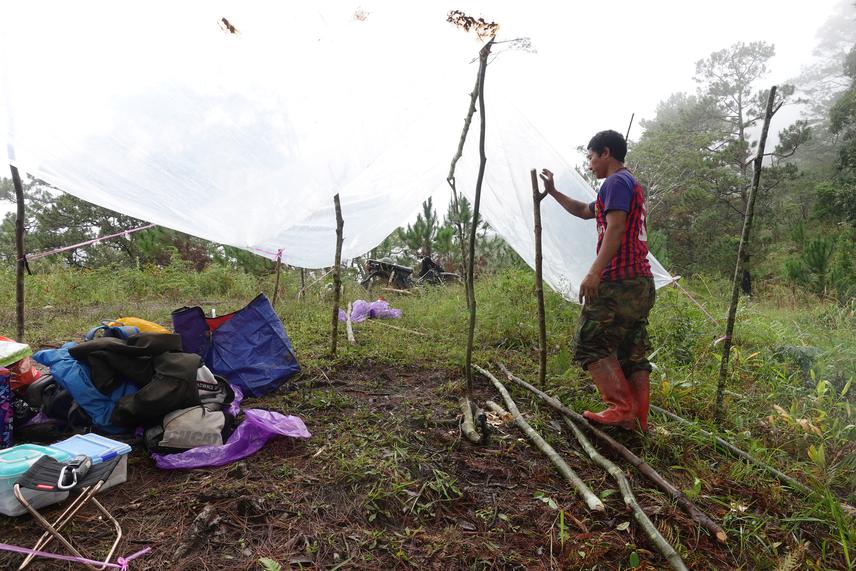 Setting up the camp.

Bidoup Nui Ba National Park located in Dalat Plateau of the South-Central Highlands; is one of four major biodiversity spots in Vietnam. It has large primary forests up to more than 2,000 m of altitude, which is a potential perfect habitat for a large number of hawkmoth species. However, no studies on hawkmoths of the Bidoup Nui Ba National Park have been undertaken yet. Therefore, an investigation of hawkmoths will be conducted for one year to understand their community structure in the Park.

The project chose hawkmoths (Lepidoptera: Sphingidae) to study because they are used as a focus taxon in many ecological investigations. Providing occurrence and ecological data on hawkmoths is thus essential to foster biodiversity conservation in Vietnam. The propose study will be the first research on Sphingidae in Bidoup Nui Ba that could be use an environmental indicator for forest quality, therefore giving an important contribution to the future management policies and conservation strategy in this park.

Sphingid samples will be collected in the Park using light traps with the nocturnal species and the collecting time goes from about a half an hour after the sunset to a half an hour before the sunrise, totaling an average sampling time will be about 10 hours per night. Some species of the genus Cephonodes, Macroglossum and Sataspes, feeding at daytime on flowers, will be collected with the use of a butterfly net along trails in the study areas where have their host plants (Gardenia, Albizia, Coffea, etc.) Because of diversity of food plants, one site representing for conifer forest and four sites representing for evergreen forest including lower and upper mountain will be set up. The condition of the natural habitat at the site will include the date, trapping time, humidity, temperature, recorded species, flight time for all single observation. Fisher (α) diversity indexes and Margalef (d) species similarity indexes will be used to assess the diversity of species collected in the study area.

An annotated checklist of the hawkmoth species of the park will be realized, in order to facilitate the future identification of the species. The study will provide the first database of hawkmoths diversity in Bidoup Nui Ba, therefore giving an important contribution to the future management policies and conservation strategy in this park.